“It was mildly thrilling and a little weird to see Amanda Burton back, whiter of hair but still as classy” 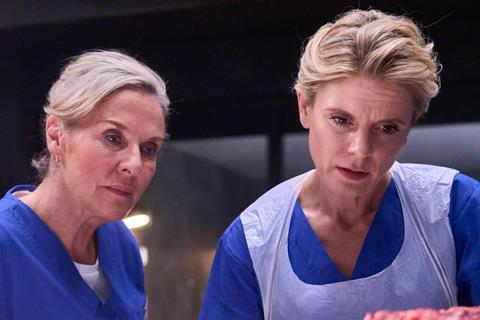 “It was mildly thrilling and a little weird to see Amanda Burton back, whiter of hair but still as classy. It was good to see Burton and Emilia Fox (as Dr Nikki Alexander) at the same post-mortem, lightly sniping at each other; like two Doctors in Doctor Who meeting in a time void and coming over all competitive. It’s also good that they’ve gone for the nice, clean shooting of a health secretary in an attack, which also left Sam’s new husband, Jomo Mashaba (Hugh Quarshie), injured, rather than some gleefully exploitive sex murder.”
Carol Midgley, The Times

“It isn’t untypical of shows like this to put the suspicion on anyone and everyone, but it was particularly piquant that Ryan herself, shifty and meddling, became a person of interest in the viewers’ eyes. This, however, also brought into sharp relief the fundamental problem with Silent Witness – Sam Ryan was always a more compelling character than Alexander, who, though they often load her up with personal problems, is a straightforward heroine.”
Chris Bennion, The Telegraph

“Soaps traditionally mark anniversaries with a disaster. Silent Witness did so by wandering into Line of Duty territory, with murky conspiracies and ruthlessly efficient assassins. Even Sam Ryan seemed to have something to hide. I can only guess how much excitement was generated among the faithful by this coming together of past and present queens of CSI. It was meant as a special treat but I imagine some fans wished they’d foreshorten the excursion into Jed Mercurio territory and focus more on such familiar matters as bullet trajectories, cutting up cadavers and finding DNA in unlikely places.”
Gerard Gilbert, The i

“The oldest crime show on TV celebrated its 25th series with the return of its first star, Amanda Burton as Prof Sam Ryan. But who will emerge the victor between Nikki and Prof Sam? They have already clashed in the autopsy room, over one of the goriest dissections ever staged. This could be a bloodbath in all sorts of ways.”
Christopher Stevens, Daily Mail

“Everyone Deeney spoke to was articulate, from the schoolgirl campaigner who understood how her classmates saw her when their teacher showed the slave trade drama Roots and all eyes turned to her, the only black pupil in the class, to the students who had conducted an enormous survey that found that 72.5 per cent of British pupils learn about the Great Fire of London, while eight per cent learn about the colonisation of Africa. The programme was short of an educational or historical expert or two, but there is no doubting Deeney’s zeal.”
Chris Bennion, The Telegraph

“With his documentary, Where’s My History?, Birmingham City striker Troy Deeney is campaigning for black history to become mandatory on the school curriculum. Deeney, who was expelled from school aged 15, may sound over-optimistic that this would ‘end the vicious cycle of racism’, but his film was certainly eye-opening. Some illustrious friends rallied to his cause, including boxer Anthony Joshua, broadcaster Big Narstie and ex-footballer Micah Richards, the latter lamenting the tokenism of Black History Month.”
Gerard Gilbert, The i

“Apple refuses to divulge the show’s budget but only a tech company with the financial resources of a medium-sized nation could achieve this. It’s TV in a new league.”
Christopher Stevens, Daily Mail