“Full of good material, especially the prominence and importance of people of colour in that society” 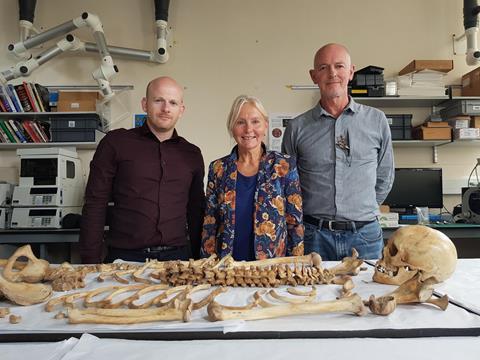 Skeletons of the Mary Rose: The New Evidence, Channel 4

“If Skeletons of the Mary Rose didn’t ‘rewrite the history of Tudor England’ as claimed, it was full of good material, especially the prominence and importance of people of colour in that society. Some will cry political correctness, but no axe was ground here; instead, it was a scientific scalpel, peeling away more layers of mythmaking.”
Gabriel Tate, The Telegraph

“For viewers who remember the Mary Rose being raised, it was doubly instructive and not a little humbling to see history made, unpicked and remade in our own lifetimes.”
Lucy Mangan, The Guardian

“The researchers all seemed staggered that four of the Mary Rose crew came from Mediterranean countries. I don’t see why. Every ship’s crew is bound to be a mixed bunch. Still, the show wouldn’t have been as dramatic if the presenters had squinted through a microscope and shrugged: ‘Well, that’s pretty much as we expected.’”
Christopher Stevens, Daily Mail

“It was an interesting documentary that would have been better had it not repeated itself after every ad break.”
Carol Midgley, The Times

“The penultimate episode of Baptiste was as enjoyably slippery as ever. Karyo’s twinkle of mischief ensured his enduring moral rectitude in a cesspit of humanity never became insufferable, while Hollander’s way with a jaded quip livened up Stratton’s lost, tormented soul.”
Gabriel Tate, The Telegraph

“A dose of over-excitement was welcome in Baptiste. This crime serial has always been slow-moving, and occasionally static. Now the story is gathering speed as the scattered storylines tie together.”
Christopher Stevens, Daily Mail

“Midsomer Murders possibly reached peak bat-shit crazy last night (a high bar, I know), but it was strangely enjoyable, mostly thanks to a perfect, light-touch performance from Peter Egan. I won’t go into the plot because I stopped caring and the denouement was comically ludicrous, but if you can’t enjoy some daft fictional sadism after a heavy week of Brexit, when can you?”
Carol Midgley, The Times