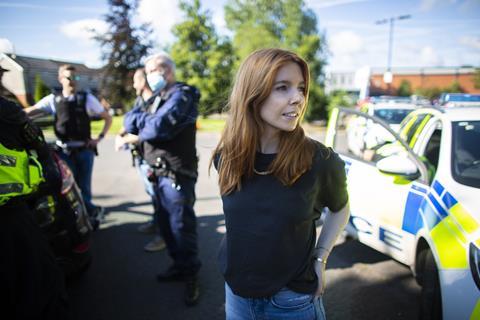 “Dooley, in an important but depressing documentary, harvested her interviewees via a unit in Cheshire, and I sincerely hope that exposing their stalkers on TV will shock them into stopping. “F***, girl,” said Dooley to Sabrina, who had discovered that it was her “lovely” ex-boyfriend who had stalked her for years, sending photos of her house and saying, “I know where your daughter goes to school.” She had thought he was a nice person and they had parted amicably. Just goes to show.”
Carol Midgley, The Times

“Dooley, with her unforced charm and gentle spirit, is the perfect presenter for such an intimate and emotional subject. She is warm, she engages without ego, and she has that ineffable gift known as the common touch. Her compassion never descends into sentimentality, and it draws out the best in vulnerable people without leaving them overexposed. She gets accused of being a lightweight and a dilettante – apparently, it seems, because she has a cockney accent. People can be snobs and idiots – let the revolution begin.”
Lucy Mangan, The Guardian

“There is another episode to go but this was not an in-depth investigation. Stacey Dooley documentaries follow a BBC Three template, which is to feature an awful lot of whoever is presenting them. Dooley is good at connecting with people and asking the right questions, but has a tendency to hog the screen; when a stalking victim played some threatening voice messages, for example, the camera was fixed on Dooley’s face as she reacted to hearing them.”
Anita Singh, Telegraph

“This was grim viewing, with a bleak conclusion. Once a stalker targets you, Stacey warned: ‘You are never truly free.’”
Christopher Stevens, Daily Mail