“Tattoo Redo manages to sidestep the elephant traps and stay light, breezy and really rather endearing.” 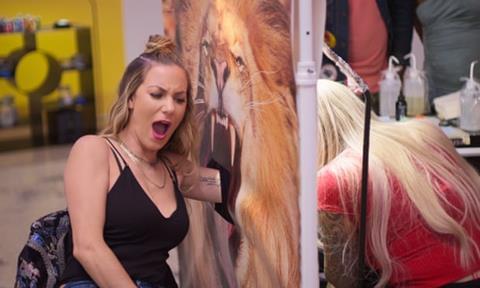 “The whole thing is ridiculously charming. The artists are all quietly confident and eager to get to work, and their expertise is, as expertise will always be, thrilling to watch. The participants are a miracle of casting. Three sets a show means there is just enough time to fill in their background and get a feel for the dynamics of each pair. But there are also pairings slightly beyond the usual, which gives the nice sense that producers have gone above and beyond the call of duty in their searches, and also provides some unexpectedly moving moments. Tattoo Redo manages to sidestep the elephant traps and stay light, breezy and really rather endearing, even before you add the joy of watching people create something from nothing.”
Lucy Mangan, The Guardian

“In many ways this is often better than normal Bake Off, with pros being properly tested by some severe judging and showing that they are as fallible as anyone. The teamwork element is fascinating and was probably the reason last night’s winners had the edge. My only gripe is the way that the presenters Tom Allen and Liam Charles overdo the Mel and Sue-influenced presenting schtick, with an even more relentlessly over-rehearsed stream of wisecracks that are rarely funny and clearly irritate the harassed contestants as much as they do the viewers. Otherwise, delicious.”
Ben Dowell, The Times

“The final of Bake Off: The Professionals could not have been further removed from the wistful kitchen of Bake Off proper, as three remaining teams of kitchen pros battled for first place. This was earnest baking for an earnest audience. Oh for a sprinkling of silliness to add a little zing. Perhaps sensing the lack of human interest, the producers tried to pluck to the audience’s heartstrings. But attempts to impose a feel-good narrative didn’t really gel with the angst-ridden kitchen action. As a result, the final lacked that one vital Bake Off ingredient. And that was a sense of fun.”
Ed Power, The i

“The depth and breadth of the apparent corruption traced by the journalist and presenter Ramita Navai is something to behold. India’s Rape Scandal is an hour that remorselessly lays out the size of the fight that women – and the men who care about them – have before them. It shows how little women matter to the men in power and – although we may argue over degree – to those elsewhere in the social order.”
Lucy Mangan, The Guardian

“India’s Rape Scandal was a horrifying and enraging portrayal of a justice system drenched in corruption and a psychopathic misogyny. Yet it was nonetheless encouraging to see public opinion in India rally around the women. Navai painted a gruelling portrait of a system weighted against the vulnerable. But her film was also a stirring testament to the bravery of family members, campaigning lawyers and journalists determined to confront evil in their midst.”
Ed Power, The i

“That bare-chested, gun-toting, marlin-fishing cliché was, you realised, mainly manufactured by the man himself. We also learnt far uglier truths, but never fully loathed him. The series wasn’t hagiographic about the work either. It also showed how this most manly of writers toyed with androgyny in bed, but the film-making was too classy to rummage too salaciously in the linen basket. Above all, it made me want to return to the books, a sure sign of a job well done.”
Ben Dowell, The Times