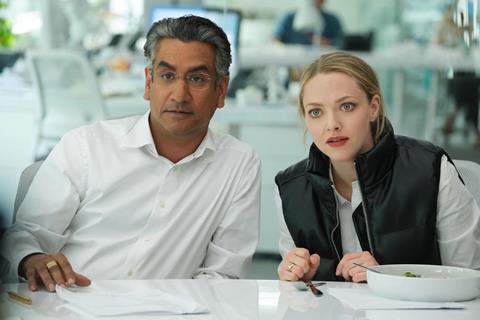 “The Dropout is a lumbering beast, but saved by two things. The first is that it is simply such a good a story that you would have to deal it actual hammer blows to kill its fascination. Its second saviour is the solid cast, led by Amanda Seyfried as Holmes. It’s a hugely skilful performance (even before she has to pull off Holmes’s famous vocal evolution), which manages to keep in balance all the disparate elements of a woman who seems, by all accounts, to have been a very strange admixture.”
Lucy Mangan, The Guardian

“The Dropout paints such a sympathetic picture of Holmes’s ‘fake it till you make it’ approach to science that I bet she hopes the judge sees it too before she is sentenced in September. This drama painted her equally as a misunderstood genius-misfit and victim who suffered from a cold mother, a weeping father losing his job in the Enron scandal, bitchy girls at school and a sexual assault at Stanford (from which she dropped out, hence the title). For what it’s worth, I think it will get better from here, which is good because so far it has felt somewhat flimsy.”
Carol Midgley, The Times

“The Dropout tells Holmes’s story with a little too much admiration, portraying her as a lone woman business warrior battling it out against boardrooms of sullen-faced, disinterested men. It makes for an interesting enough TV show. But given the complexity of the saga, it could, and should, have gone further in interrogating the unethical and dangerous risks she took.”
Emily Baker, The i

“The final product is, ultimately, more viable than anything Theranos ever produced. Anchored by Seyfried’s charmingly vulnerable central performance, and assisted by the comedy chops of executive producers like New Girl’s Elizabeth Meriwether and Search Party’s Michael Showalter, at its best it feels like The Wolf of Wall Street, if Jordan Belfort were replaced by Paris Geller. But all too often the temptation for foreshadowing, blunt symbolism, or the skewering of LinkedIn babble, gets in the way of this being an effective human drama.”
Nick Hilton, The Independent

“McKellen is always great entertainment. And Rajan knew to let his star do most of the talking. What hampers Rajan, however, is what I suspect is an edict from on high – that he must grab headlines. As such the last 10 minutes saw Rajan go for the spicy stuff: what did he think about non-Jews playing Jewish people? What did he think about award ceremonies? Could he say something mildly controversial that might trend on Twitter? Whoever oversees this format should let Rajan get on with the conversation and eschew the cheap prodding.”
Benji Wilson, The Telegraph

“It is hugely entertaining, striking just the right tone, half absurd, half empathic, aware of its own limitations and playing up the flawed characters at the heart of it. Joe vs Carole is a lot to take in, as might have been expected. You can hardly call the source material understated. But it is bracing, fun and surprisingly measured.”
Rebecca Nicholson, The Guardian