‘It would take some doing to derail the Bee’ 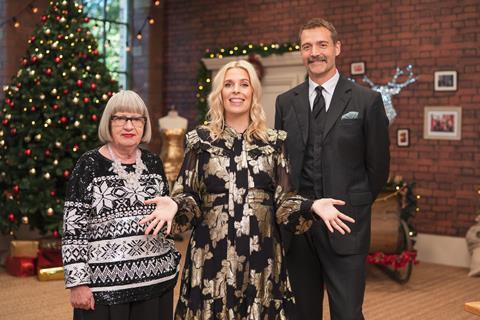 “Three of the four celebs looked as if they had never seen a sewing machine before. Coronation Street’s Antony Cotton, whose mum Enid was a haute couture dressmaker, did know his way around a pattern but couldn’t hide a ferocious competitive streak. He needn’t have tried so hard. He was bound to win, simply by using a needle and thread instead of a staple gun like the laidback, and very funny, Kiell Smith-Bynoe.”
Christopher Stevens, Daily Mail

“Sewing Bee has always played second fiddle to Bake Off and the presenters in both always have to work much harder with the amateur experts than the celebs: it takes more to draw them out of themselves, while not overshadowing the contestants’ characters with your own ego and one-liners. On this showing Pascoe is going to yin Lycett’s high-camp yang with some diffidence and warmth. Whether that still works with real people remains to be seen, but it would take some doing to derail the Bee.”
Benji Wilson, Telegraph

“It showed in a jolly “let’s have some festive fun” way that, once again, I’m wrong. It is still hugely popular, despite its waxworks of Simon Cowell and its Boris Johnson being laughably bad (Prince Harry and Helen Mirren were very good, to be fair). I hadn’t realised that in 2016 the Chamber of Horrors was withdrawn because it was deemed to be in “bad taste”. That was the main reason for going!”
Carol Midgley, The Times

“ITV’s documentary started as a behind-the scenes look at the waxwork museum – but it ended up a pertinent commentary on celebrity churn”
Benji Wilson, Telegraph

“The real fun of the waxworks, though, is not how lifelike they are but how silly it is to see them all together. The image of David Bowie and Judi Dench getting the once-over with a feather duster is delightful.”
Christopher Stevens, Daily Mail

“Series two has not changed at all, packing in the same old “oh là là” French clichés and being almost gleefully bad. Well, you don’t tamper with a winning formula. If people like watching something with the emotional complexity of a hair bobble just so they can see thin people wearing high fashion, who is it harming? Apart from my knuckles as I chewed them to the bone.”
Carol Midgley, The Times

“Crucially, it’s funny, and has a winning, easy charm. It feels like the kind of comedy that trusts its audience with smart jokes. The humour is divided between young Dean’s wide-eyed wonder and youthful sensitivities, and the older Dean’s knowledge, as narrator, that when you are 12, the trivial stuff can seem insurmountable, and the things that really matter might fade into the background. It realises that viewers can handle the big ideas with the smaller ones, often at the same time. The test for any reboot is whether there is a point to it. Has it done something new with the name, rather than coasting on brand recognition? The answer, in this case, is an emphatic yes.”
Rebecca Nicholson, The Guardian