“Four Lives doesn’t linger on the crimes themselves, but balances the events leading up to them with the fallout” 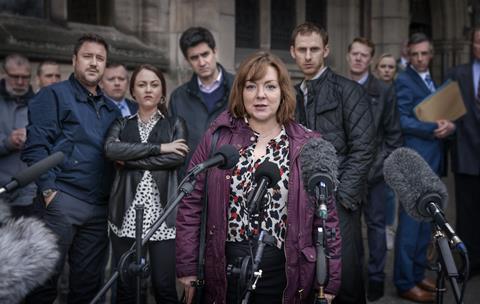 “The supporting cast is excellent. One performance that sticks in the mind is Rufus Jones as Gabriel’s landlord…Writers Neil McKay and Jeff Pope have striven to find the goodness in a dark story. They have also avoided the pitfalls of this genre. There is nothing gratuitous, and no sense of the killer being glamorised. This is true-crime drama done as well as it can be.”
Anita Singh, The Telegraph

“Beyond that, and despite the usual great work of Sheridan Smith (as Anthony’s mother, Sarah) and others, the drama never catches fire. It is doomed perhaps by the extremity of the police failures. News reports of the inquest jury findings are compelling reads – the list of things the police did not do, chose to ignore or failed to follow up is mind-boggling. Some of the most egregious examples (in a competitive field) make it into Four Lives.”
Lucy Mangan, The Guardian

His performance as serial killer Stephen Port in Four Lives has strong echoes of David Tennant’s superb portrayal two years ago of another monster who preyed on young gay men – Dennis Nilsen, in ITV’s Des. There is nothing flamboyant about the performance. Crucially, he doesn’t try for laughs, even when he’s indulging in his other obsession – buying children’s toys through eBay. True crime drama treads a difficult line. It risks exploiting the victims and their families, glorifying the killer or lingering on the squalor of the deaths. By concentrating on Sarah’s fight for justice, Four Lives avoids these pitfalls.”
Christopher Stevens, Daily Mail

”Ultimately, it was an emotive tribute to a mother’s determination to achieve justice for her son. If Merchant’s Port showed us the worst in humanity, Smith’s raw and honest turn ensured the focus was on the young men whose futures were so horrifically stolen.”
Ed Power, The i

“Opening instalments of dramas like this are difficult. They have to show the life before, that we know is to be ripped apart, without the dramatic ironies becoming heavy. They must show us how events turn an ordinary person into our extraordinary protagonist, but not foreshadow their destiny too blatantly. Anne avoids these traps with assurance.”
Jack Seale, The Guardian

“TV deserves credit for devoting a full four hours to this scandal, which requires time and nuance to do it justice (it is broadcast over the next three nights), especially in the new year, when channels might be tempted by “lighter” subjects. Maxine Peake’s performance as Anne, first floored by grief but then galvanised into action, was potent. The dramatic effect was heightened by the interweaving of real footage from the time…Kevin Sampson’s script was lean and authentic at the moments that mattered, such as when Anne and Steve, deep in grief and shock, spoke in half, unfinished sentences, just as people do. It is 26 years since ITV broadcast Jimmy McGovern’s critically acclaimed TV film Hillsborough. Anne showed that, almost 33 years after the tragedy happened, it has lost none of its dramatic force.”
Carol Midgley, The Times

“Drama like this, gruelling as it can be, is a reminder that a diligent population should always be suspicious of its cops. While Walters is a sturdy and sympathetic husband, at least to start with, Peake will take the notices and presumably many prizes for her performance as Anne: heartbroken, grieving, vengeful, determined…It’s compassionate, knowledgeable writing. Director Bruce Goodison evokes the period with considerable attention to detail alongside archive news footage: clips from the game itself; Des Lynam and Jimmy Hill discussing what happened; Margaret Thatcher announcing there will be an inquiry. The producers are World Productions – they of Vigil and Line of Duty – and for a tragedy that unfolds over nearly a quarter of a century, Anne bounds along at a surprising clip. But for all its polish, and Peake’s commanding lead, Anne sometimes verges on being too much to bear. Settling down to a film about Hillsborough, you know you are not in for Harry Hill’s TV Burp, but it’s a lot all the same.”
Ed Cumming, The Independent

“This fun, stylish and confident caper, which clearly still has numerous twists up its sleeve and characters to play with. The growing friendship between The Man and Helen – and the toxicity of her marriage currently being sketched in – promises to give the drama heart, too. Dornan is on fine form (and everyone who had begun to worry that they had hallucinated his acting ability in The Fall can sigh with relief and pat themselves on the back at the same time) and five more hours of this Memento-lite production should slip down as easily as The Man’s post-bomb beer.”
Lucy Mangan, The Guardian

In another production, these elements might feel rushed, but The Tourist, directed by Chris Sweeney (and Daniel Nettheim for the final three episodes), knows how to play the quiet scenes alongside the crash and bang. Like all good westerns, it takes time to establish the geography, not only the desert but the sad little towns through which The Man passes as he pieces together what has happened. His plight doesn’t strip him, or the script, of a sense of humour…The Tourist might be his best work yet. He takes advantage of a script that lets him stretch his metaphorical muscles as well as the more literal ones, abundant as they are. For a mysterious stranger, he is impressively well rounded beneath his thick beard: relentless, bewildered, cool, charming, scabrous, and terrified according to the situation. Whoever this tourist is, it will be fun finding out.”
Ed Cumming, The Independent