The Sister; The Undoing; Morning Live

“There’s lots to discover in this slice of Gothic horror, and Halloween week is the perfect time to succumb to its creepiness” 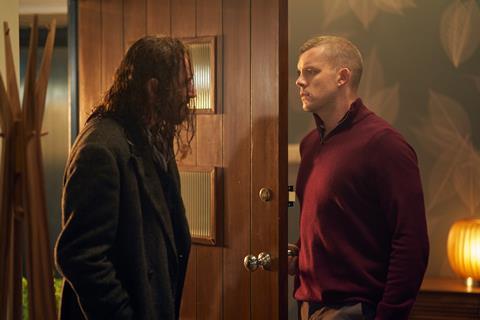 “The Sister was car-crash drama: horrible to look at, but you couldn’t turn away. Bertie Carvel’s Bob was ridiculous and compelling, definitely the most watchable performance of the episode. Russell Tovey was introverted and twitchy as Nathan, a nice-seeming bloke trapped in a nightmare. Yet I never for a moment believed that he and Holly could be married. I have seen two mannequins in a Debenhams window with more chemistry.”
Carol Midgley, The Times

“For so long a reliable ensemble player, Tovey gets an overdue lead here and proved well up to the task as a solemn, anguished everyman. The attraction between Nathan and Holly felt more elusive than his own deeply felt torment, while the chronological jiggery-pokery was overused and eventually irritating, serving merely to slow the pace with the menacing atmosphere already close to suffocating. Fortunately the drama jolted into life whenever Carvel was on screen. His magnificently malign performance turned this hokum into evocatively sinister fare for Hallowe’en week.”
Gabriel Tate, The Telegraph

“It’s hard to feel much sympathy for Tovey’s character. Perhaps he didn’t mean to kill Elise – but he didn’t marry Holly and lie to her for seven years by accident. All Nathan can do to make amends is look drippy and remorseful. That leaves the door open for Bertie to swoop in and steal every scene, which he does — ruthlessly. But there’s lots to discover in this slice of Gothic horror, and Halloween week is the perfect time to succumb to its creepiness.”
Christopher Stevens, Daily Mail

“The Sister might have a familiar premise: a missing woman, an anxious man who (probably) had something to do with her disappearance and a cast of unwitting bystanders whose lives would implode were the truth to come out. Less familiarly, and unexpectedly, there was a ghost – or at least, the suggestion of one. Tovey and Carvel’s performances were impressive – it was what we didn’t see, communicated by their states of panic, dread and confusion, which really sent shivers down the spine.”
Emily Baker, The i

“The entire proceedings are filmed in horror-movie cliche – dark, rainy nights in shadowy woods with ghoulish dialogue, all ideal for near-Halloween viewing. They forgot to put a pumpkin in the window, but that’s about it. What stops it being risible is the strength of the cast and the very clever, subtle way Neil Cross gets us to believe – not necessarily that poor dead Elise is a ghost, but that Bob thinks she is, and that his convictions are dangerous.”
Sean O’Grady, The Independent

“It’s the casting that elevates The Undoing above the next glossy psychological thriller. Hugh Grant’s shifty demeanour makes for such a perfectly combustible match with Nicole Kidman’s brittle elegance that it is a surprise they haven’t been paired together before. In the unlikely event that the cliffhanger-filled whodunnit doesn’t grip you, it’s absolutely worth sticking around to appreciate these masters at work.”
Ellen E Jones, The Guardian

“Initially it lacked the bitchy bite of Big Little Lies. Kidman’s character seemed too bland and nicey-nicey to intrigue. Then it started to ripen. Kidman’s eye-swivelling was off the charts as Grace’s perfect life looked to be unravelling. Again we seem to be gazing at the dark, maggoty underbelly of wealth and privilege. I’m definitely in.”
Carol Midgley, The Times

“The whole thing was delicious fun but wafer thin, as superficial as the cheer for diversity at the auction and kept afloat largely by Kidman’s typically poised and enigmatic turn. Despite shades of Roger Moore attempting gravitas, this was Grant’s most serious piece of acting for decades and he acquitted himself well. Whether the story can sustain five more hours may depend on his ability to dig deeper to find the potential sociopath beneath the familiar charming rogue.”
Gabriel Tate, The Telegraph

“The opening hour was a slow start to an exciting story. Each seemingly banal domestic scene carried an undercurrent of unspoken tension, and our patience was rewarded with two shocking twists: I imagine they will not be the last.”
Emily Baker, The i

“The Undoing has the makings of a keen satire, in which these people slowly learn the extent of their self-deceit. As the plot starts to turn, however, and lawyers and policemen are involved, the programme’s satisfyingly deadpan touches are tangled up in its desire to be a more conventional thriller. The arrival of Edgar Ramirez as Detective Mendoza ought to inject pep, but instead you’re left with the sense that the cops are here to break up the party. Where Big Little Lies found a distinctive voice, The Undoing’s various virtuoso sections never quite play in concert.”
Ed Cumming, The Independent

“If not quite achieving This Morning levels of banter, Kim Marsh and Gethin Jones shared an easy mateyness. As was the plan, Morning Live slipped inconspicuously onto the airwaves. You forgot all about it 10 seconds after the credits rolled. But, much like a buttery scone or cup of tea with the precise sugar-to-milk ratio, in the moment it went down perfectly.”
Ed Power, The Telegraph