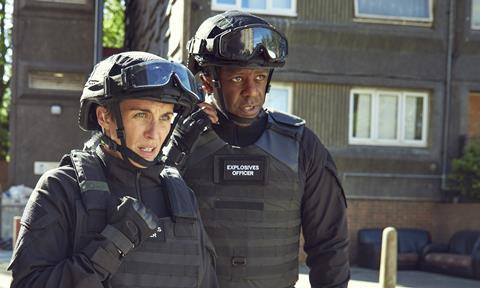 “Debut screenwriter Daniel Brierley has done a sterling job. It’s not often a TV scene shocks me so much that I yelp, but it happened here. Trigger Point has its work cut out now, after such an arresting start.”
Anita Singh, The Telegraph

“It’s great fun as long as you set your preposterousness levels to ‘high’. Go in thinking CSI: Peckham or Line of Bomb Duty or Bomby McBombface, rather than The Wire But With Actual Wires or Breaking Explosively Badly and you’ll enjoy yourself a lot more.”
Lucy Mangan, The Guardian

“With Vicky McClure starring, and Jed Mercurio producing, comparisons will inevitably be made with the BBC juggernaut but Trigger Point did enough to establish itself as its own beast, most notably with the bold move to stage the whole first episode as a big set piece. There was barely a moment to breathe in this exciting opener – and the stakes couldn’t have been higher.”
Rachel Sigee, The i

“Trigger Point was a drama of two halves in that the first part was really quite boring and the second wasn’t. It’s a show that reminds us how very brave bomb disposal officers are. I’m just not sure yet if long sequences watching wires being snipped in bathrooms makes for very good telly.”
Carol Migley, The Times

“It is a series that chugs, very happily, in second gear and doesn’t seem to mind that many of its characters are cardboard cut-outs. It’s all quite low energy, but absolutely lovely to look at with the Sri Lankan scenery (it is set in India, but filmed in Sri Lanka) nourishment for tired UK eyes in bleak January.”
Carol Migley, The Times

“The plot of each episode is immaterial, really. Just play it in the background, with its lovely music and gorgeous setting, and it will induce feelings of calm and wellbeing.”
Anita Singh, The Telegraph

“That’s what makes this series such engaging entertainment for a Sunday evening. It’s too low-budget to give us much of a flavour of India — there are no landscape shots, just scrappy views of a stretch of shabby beach from Neil Morrissey’s bar. But the romances are in the grand tradition of hospital passion ever since Dr Kildare.”
Christopher Stevens, Daily Mail

The Caribbean with Andi and Miquita, BBC2

“Andi Oliver and her TV presenter daughter Miquita were a charming double-act. They would have made for excellent company if all the BBC could manage was packing them off on a camping weekend to Skegness.”
Ed Power, The Telegraph

“The Caribbean with Andi and Miquita sounds like another entry into the canon of celebrities filming lighthearted travel shows with their parents. But this BBC two-parter was significantly more interesting than its title suggested. Both Olivers were, as to be expected, utterly charming – natural, funny and admirably open about their own internalised racism.”
Rachel Sigee, The i

“The Caribbean With Andi And Miquita purported to be a life-changing journey to discover their roots, though it looked suspiciously like a glorified trip to visit family.”
Christopher Stevens, Daily Mail