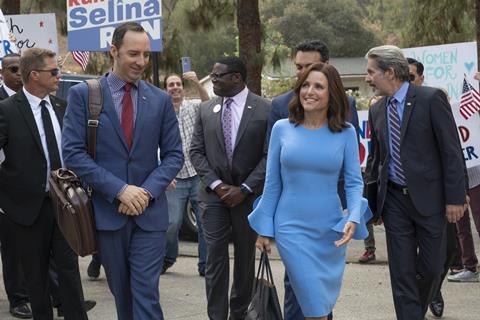 “This is masterful comedy, packed out with the darkest of zingers, its black heart buoyed only by the delighted embrace of its silly, clown-like brilliance.”
Rebecca Nicholson, The Guardian

“It was a joy to see the gang back together, trading razor-sharp quips. Veep’s bipartisan, brutal skewering of political ineptitude and venal ambition has never felt more timely.”
Michael Hogan, The Telegraph

“This seventh and final season of the comedy feels like the right time to say goodbye: despite the slick cast and still perfectly polished wisecracks, there are surely only so many times we can watch Selina (the magnificently monstrous Julia Louis-Dreyfus) screw up her shot.”
Sarah Hughes, The i

“Anyone who could manage to be cynical about last night’s DIY SOS must not have a heart, but a big swinging brick. If you could watch it without shedding a tear, check that you don’t have a glass eye. I shed many. Here was tragedy soothed by community and compassion. It was reality TV as a force for good, and you can’t say that very often.”
Carol Midgley, The Times

“DIY SOS may be an old formula, and in purely televisual terms not much happens between the opening dilemma and the closing big reveal other than building work and banter. But it’s a reminder that people really do have an enormous capacity to be kind to each other. And in these confusing political times that’s as life-affirming as everyday television gets.”
Gerard O’Donovan, The Telegraph

“Morven Christie is good as an imperfect family liaison officer who happens to have shagged the husband of the family she is comforting. Some of the dialogue is sharp. But I do wish it had the odd shaft of light relief to pierce the gloom. I know a dead teenager isn’t exactly lols territory, but it is unrelentingly bleak.”
Carol Midgley, The Times

“With three episodes still to go, the pace needs to quicken and the pieces need to start falling persuasively into place if there’s to be any hope of seeing this one through to the end.”
Gerard O’Donovan, The Telegraph

“I want to love it. But like poor old Wile E., my disbelief is in freefall, hurtling down through the plot holes. Unable to accept DS Lisa Armstrong as the heroine, I can’t help finding fault with every other detail — the kind of inconsistencies that usually pass without notice in fast-paced detective tales.”
Christopher Stevens, Daily Mail