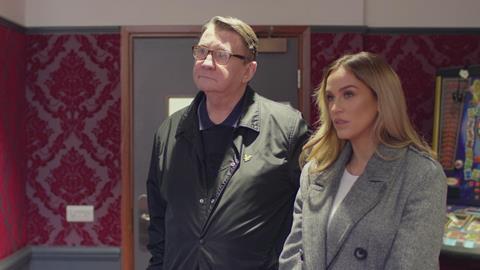 “She is an absolute gift of a presenter: commanding, charismatic, beadily intelligent, unfailingly honest and unflaggingly articulate. You hope that, off the back of the absolute blinder she plays here, she will be given the opportunity to broaden her reach. Alcohol, Dad and Me is trying to do too much in one hour. Any one of its concerns – from the intergenerational effects of trauma, via the roots of addiction, to the awful conundrum presented by the desire to support the addict (and when does that become enabling?) and the need to protect oneself – could easily fill a whole programme. Vicky’s own “problematic” drinking rather fades from the picture as John falls off the wagon, and her mother’s story could fill another hour, too.”
Lucy Mangan, The Guardian

“She was well-versed in therapy-speak about “taking ownership” and “changing the narrative” but still made for engaging, charismatic company. At family mediation, her candour was quietly devastating.”
Michael Hogan, The Telegraph

“She repeatedly talked about feelings of anger and self-loathing, yet didn’t consider whether the impact of binges on her brain was making these worse. Instead, she recited therapy waffle about ‘feeling validated’. Making this programme took bravery, and might prove to be, literally, a sobering experience for her. But comparing herself with her father, or anyone else, won’t help. There’ll always be someone who drinks more than you — a Duke of Buckingham.”
Christopher Stevens, Daily Mail

“The Pattisons offered a generous glimpse into a struggle that spans generations and acres of moral grey. Touching, troubling and disarmingly honest, Vicky Pattison: My Dad, Alcohol and Me will no doubt resonate with countless viewers who find themselves on the same spectrum.
Emily Watkins, The i

“As the deliriously audacious series unfolds, the auteur and his muse develop a lovely bond. Action flits between the silent original, the contemporary film-within-a-film and the making of both. Dialogue switches from English to French. Just to make it even more multilayered and meta, Vikander also plays original Vep actress Musidora in flashbacks to the 1916 production, while Macaigne doubles up as Feuillade. Clear as mud? Très bon.”
Michael Hogan, The Telegraph

“It’s a thankless shoot, dealing with unbiddable actors who can’t understand their characters’ motivations, or are angling for sex scenes, complete with intimacy directors (this being 2022), as a way to get close to former lovers. The supporting characters – and cast – are wonderful…It’s a visual treat for those of us who got hooked on chic Frenchness via Call My Agent; even Emily in Paris gets a wry namecheck here. And it is funny, particularly René’s farcical film shoot. ”
Emine Saner,  The Guardian

“Slow, repetitive, wordy, split into lumpy scenes and shot with self-conscious trickery, it’s full of Hollywood in-jokes. Irma Vep veers from silent movie pastiche to romance, satire to horror, randomly paying homage to obscure films and being extremely pleased with itself. Arthouse-cinema fans seem to put up with this sort of plot porridge, but television viewers deserve much more.
Christopher Stevens, Daily Mail

“Trainwreck isn’t funny (unless you count the mullet-haired Beavis and Butt-Head-esque interviewee). It’s three episodes’ worth of jaw-dropping television, as you marvel at just how much worse things can get. You won’t be able to stop watching. Fyre Festival was competently organised when compared to this. The narrative builds terrifically, with contributors from all sides giving their accounts of what went on. ”
Anita Singh, The Telegraph