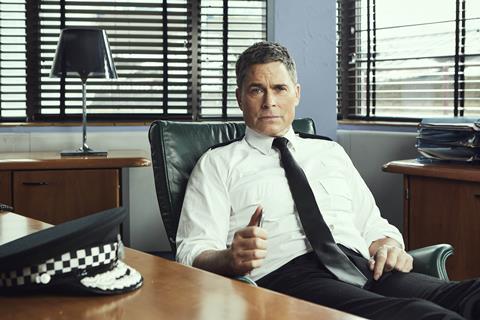 “One minute this show was a slapstick send-up, with Lowe hurling cabbages like shot puts. The next it was creepier than any Scandi-noir, as a fat man in a vest serenaded the severed head in his fridge. It’s all more unbalanced than a middle-class weekend clubber out of his tiny brain on horse tranquilisers and methamphetamines.”
Christopher Stevens, Daily Mail

“Wild Bill is an odd hodgepodge that tries to be tragic and comic simultaneously and was so hammy during that wind turbine scene at the end that I thought my eyes might bleed. Amazingly, though, it’s not completely terrible. At times it’s funny, largely thanks to Rob Lowe’s effortless comic timing and deadpan (and, yes, handsome) face.”
Carol Midgley, The Times

“There were more plots and sub-plots than a medieval strip farm, which means that daft as it was, if the show can work out what it’s actually about then there’s reason to stick around.”
Benji Wilson, The Telegraph

“Wild Bill left me needing a lie-down, but with faith that the America versus Lincolnshire humour and the generous depiction of rural British life will be enough to carry the next five episodes. And, much as we all loved Bodyguard, at least this police drama is aware that it’s completely ridiculous.”
Barbara Speed, The i

“If you can avoid getting trampled by the hooves of insanity galloping through it, there’s enough to make Wild Bill a good way to fill the commercial hour.”
Lucy Mangan, The Guardian

“The programme did well to strike a balance between the jolly and the serious, and, although I can’t see how it will last four episodes, it offers something important and fresh.”
Carol Midgley, The Times

“By telling all of the staff members’ stories, and then giving them all a decent chunk of airtime, it treated them as individuals. If the problem for people with dementia is that they become invisible to society, this programme, gimmick or not, will at least make them be seen.”
Benji Wilson, The Telegraph

“Some of the vignettes were heartbreaking. But it was sadly undermined by Channel 4’s perennial instinct to snigger — all plinky-plonk soundtrack with the emphasis on blunders.”
Christopher Stevens, Daily Mail

“In an age where we glorify retiring at 30 or working three-day weeks, this is a fascinating meditation on illness and the meaning of work with a gentle heart and an armful of difficult questions.”
Barbara Speed, The i