“Clare Balding filled with Olympic fervour is a British treasure, pride of our sporting nation. Clare Balding steaming with indignation is another thing altogether, Boadicea on the boil.” 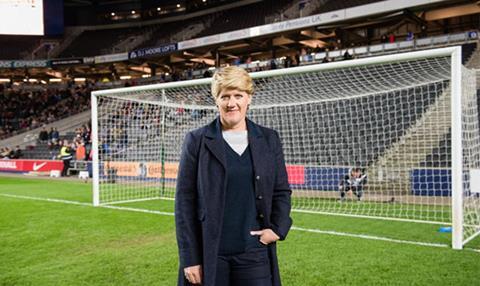 “Clare doesn’t have an awful lot to work with. There’s a bit of juddery old footage that speeds up and slows down as the camera operator’s arm tires and finds life again. It is an extraordinary story. Ripe to be made into a drama, I think, in order to fill in the gaps, and to flesh out the characters.”
Sam Wollaston, The Guardian

“Clare Balding filled with Olympic fervour is a British treasure, pride of our sporting nation. Clare Balding steaming with indignation is another thing altogether, Boadicea on the boil. This show needed a historian’s eye, not a feminist’s fiery glare. Clare was judging the past by the standards of today.”
Christopher Stevens, Daily Mail

“This was an absorbing slice of lost sporting history, passionately told. It’s just a shame it aired at 10pm, not an hour or two earlier when it would have found a wider audience. Then again, for a film about women’s football, maybe that was ironically apt.”
Michael Hogan, The Telegraph

IN THE DARK, BBC ONE

“This drama made an atmospheric start last week, but took a terrible downturn as story and heroine fell apart. MyAnna spent most of the episode punching, pummelling and strangling anyone who upset her. Any male copper who behaved like that would be nicked for brutality. MyAnna’s a woman, though, so it’s all right. Sometimes sexism comes in useful.”
Christopher Stevens, Daily Mail

“This thing misfired on all cylinders: MyAnna Buring’s unconvincing performance as Weeks; her character’s ludicrous interpretation of her policely duties; the comedy dialogue of the “eccentric” pathologist Phil; and the bloody denouement in the “old pumping station”.
Andrew Billen, The Times

“Addicted Parents left viewers shocked with one particular scene. The “uncomfortable” programme followed families at Phoenix Futures’ Specialist Family Service, the UK’s only family rehab and focuses on four mothers who are addicted to drugs that must get clean or face losing their kids.”
Rory O’Connor, Daily Express

“A hazard for documentaries about addiction treatment is the misguided feelings of moral superiority and schadenfreude they can unwittingly generate in viewers. The “jeopardy” on Addicted Parents was so high, however, it was impossible not to feel the gravity.”
Andrew Billen, Then Times