International film-makers are impressed by the emirate’s aim to become a regional ‘content hub’ and its 30% cash rebate. 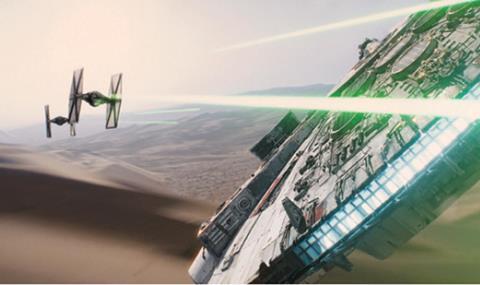 Abu Dhabi’s high-profile 2014, which saw it attract the shoots for Fast & Furious 7 and Star Wars: Episode VII — The Force Awakens and TV shows such as The Bold And The Beautiful, cemented the emirate’s position as a destination for international productions in 2015.

Productions landing in Abu Dhabi at the tail-end of the year include Rohit Dhawan’s Dishoom, described as a Bollywood-style Fast & Furious using motor-bikes rather than fast cars, and Brad Pitt’s Netflix-backed War Machine, scheduled to shoot from October to November.

It also remains a popular destination for Arab productions including the local version of Sesame Street (Iftah Ya Sim-Sim) and the region’s Entertainment Tonight spin-off ET Bil Arabi.

A number of the luxury cars in the Abu Dhabi-shot scenes of Fast & Furious 7 were provided by a local company called PP-Performance.

Abu Dhabi’s ongoing drive to turn itself into a content hub for the region means there is a growing pool of crew and post-production professionals, trained and nurtured by the government-backed media group twofour54. The group recently won the best editing award at the regional Digital Studio Awards. It is about to relaunch refurbished post-production facilities that first opened in 2009. International productions still import key crew for now.

Deserts and futuristic cityscapes are the main draws. The rolling dunes of its western desert were used to recreate the backdrop of Jakku in Star Wars: Episode VII — The Force Awakens and also feature in Akshay Kumar’s Baby. In Fast & Furious 7, one major stunt involved Van Diesel’s character driving off the 45th floor of one of the five landmark Etihad Towers.

More than 40 hotels opened in Abu Dhabi in 2014, which gives international productions plenty of choice at a range of price points. This spend is usually eligible for the 30% cash rebate. Luxury hotels suitable for A-list cast include the seven- star Emirates Palace and the St Regis, which boasts the highest suspended presidential suite in the world.

As well as the beaches, the list of culture must-sees is headed by the Sheikh Zayed Grand Mosque. There is also Ferrari World and the Grand Prix circuit, where Fast and Furious 7 stars Vin Diesel and Tyrese Gibson reportedly tried out the local pastime of ‘dune-bashing’ – or hitting the dunes in a four-wheel-drive vehicle.

The largest of the United Arab Emirates’ seven states, Abu Dhabi covers an area of 67,340 sq km. It has a modern and well-maintained road system but beware — the state has one of the highest rates of road fatalities in the world. It is a two-hour drive to Dubai and a 40-minute taxi ride from Abu Dhabi International Airport to the centre of the city.