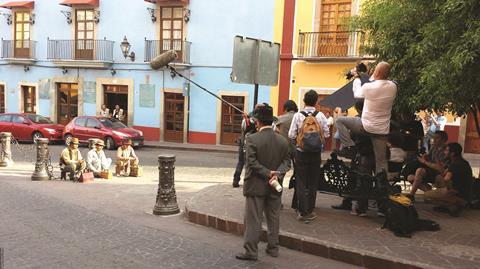 The reality of shooting on location in Mexico is far from the edgy on-screen depiction of the country often favoured by its arthouse film-makers. Instead, Mexico is a location with strong studio facilities, generous incentives and highly trained crews who can cope with everything from huge Hollywood movies such as Neill Blomkamp’s Elysiumto low-budget features from European auteurs such as Peter Greenaway’s Eisenstein In Guanajuato, which shot in Guanajuato earlier this year.

Mexico City is the hub of the film and TV industry and Mexico City’s Film Commission has become increasingly active in processing applications for TV dramas, commercials, documentaries and feature-length films.

“Shooting in Mexico was a positive experience. We had a local co-producer and the local crews were amazing, enthusiastic, professional and willing to work hard. We had a mixed crew, Mexican and Dutch.”
Femke Wolting, producer, Eisenstein In Guanajuato

What financial incentives are aimed at international producers?

The ProAudiovisual Fund (ProAV) incentive gives a 7.5% cash rebate of all expenses incurred in Mexico and, combined with relief on VAT, it can reach up to 17.5% of the production budget. There are various government funds, including Eficine 226, Fidecinem and Foprocine, aimed at stimulating the local industry that international producers can access if they work with a Mexican co-producer.

Is there a minimum spend requirement?

Are the financial incentives easy to combine with those in other territories?

Yes. Greenaway’s Eisenstein In Guanajuato was shot in Mexico using Eficine but was still able to access tax-shelter financing in Belgium.

Are TV productions and commercials eligible for the financial incentives?

Which international features have shot recently in Mexico?

Which international TV projects have shot recently in Mexico?

What are Mexico’s key physical and geographical locations?

Everything from empty desert landscapes to crowded urban sprawl, from colonial-era ranches and palaces to skyscrapers. Film-makers can find all types of ecosystems, architecture, ancient ruins, magical towns, jungle, deserts, forests and beaches, in this hugely varied territory.

What are the major film studios?

No, Mexico’s bi-lingual Spanish and English-language crews have a long tradition in film production.