“There was very little evidence in [Hirst’s] conversation of the searching self-dissatisfaction that is often the hallmark of a great artist.” Read on for the verdict on last night’s TV. 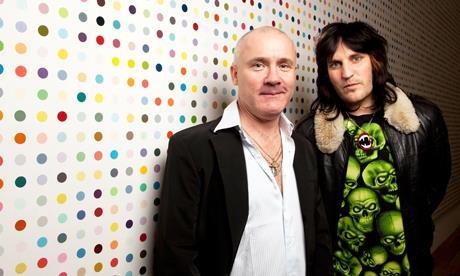 “It was an engaging watch… But there was very little evidence in his conversation of the searching self-dissatisfaction that is often the hallmark of a great artist. By contrast, Hirst appeared to be one of his own biggest fans.”
Tom Sutcliffe, The Independent

“Most artists are understandable keener to discuss their art rather than its value, but with Hirst the two are hopelessly intertwined.”
John Crace, The Guardian

“It’s a precarious combination of the subtle and the lurid… But it’s a balancing act that’s splendidly worthwhile.”
Ed Potton, The Times

“My guess is that if you’re already a Martin fan, then Mondays will be a night to stay in and watch TV: but for the unconverted there is little here to make you go back and watch the first series on DVD.”
John Crace, The Guardian

“A documentary that set out to correct cloak-and-dagger melodrama itself kicked off with one of those slow motion blossoms of flame so indispensible to screen thrillers, and kept defaulting to the much-loved tropes of the form.”
Tom Sutcliffe, The Independent

“At one time I used to believe our prisons were full of people with little imagination. Our Crime made me perform a radical rethink because if anything the young men featured suffered an excess of imagination.”
Matt Baylis, Daily Express

“The Croydon lass knocking up demystified bistro classics in her tniy apartment kitchen has been a great hit on this side of the Channel. Over there though, things might be different.”
Matt Baylis, Daily Express