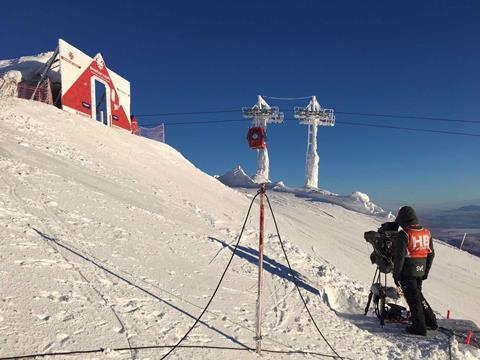 This month’s FIS Alpine World Ski Championships are being captured with a complex and extensive remote IP production set up involving 80 cameras along the course.

The production setup for the competition, being held in Åre in Sweden from February 4-17, has the largest number of cameras deployed and the highest volume of remote signals – video, audio and data – transmitted to date from a live location to SVT’s headquarters in Stockholm, over 600 km away.

Grass Valley’s DirectIP capability enables the XCU base stations to be situated in the central equipment room in Stockholm, while the cameras are in the snowy hills of Åre.

DirectIP simplifies the interconnections that need to be made, allowing all the camera signals to connect straight into the XCU. This also enables the shaders to match the cameras, without any delay, with fewer people traveling and in a comfortable environment in Stockholm.

“This accomplishment demonstrates how far we’ve come in executing remote productions, especially looking back at our remote setup in 2012 for the London Summer Games,” said Adde Grandberg, director of technology, CTO, at SVT. “Together we’ve set a new benchmark for live remote production at a major sporting event.”

“When SVT first approached us about this project, the capacity to support so many cameras and reliably transport uncompressed HD signals over IP across such a large distance was unprecedented,” said Larissa Görner, strategic product manager at Net Insight.

“Our customers are continuously raising the bar and rewriting the rules for what’s possible with live production. Remote production is the next step change, opening up new ways of working by allowing a production team back at base to have all the resources they need to deliver high quality, captivating content,” said Mark Hilton, vice president, live production at Grass Valley.