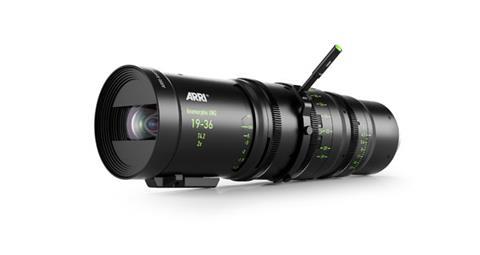 The new Anamorphic Ultra Wide Zoom (AUWZ) lens features a telecentric optical design and highly uniform field illumination, from the centre to the very corners of the image.

Arri said possibilities for wide-angle compositions when shooting anamorphic have been strictly limited in the past, due to a lack of high-quality lenses. Compromises such as heavy distortion, pronounced breathing and poor resolution and contrast have always been major problems with existing lenses on the market.

With the anamorphic elements positioned at the rear of this lens, Arri claimed focus breathing is virtually non-existent, distortion is kept to an absolute minimum and straight lines stay straight, even at close focus.

The patented lens technologies built into the AUWZ render an inverted image at the sensor plane – a side-effect of the design that is overcome with the simple press of a button on most high-end digital cinema cameras.

With a minimum object distance just beyond the front lens element, the company said the AUWZ allows dramatic and highly emotive close-ups.

Flares, which Arri claimed are very well controlled by the multilayer, anti-reflective lens coating, generate a creaminess around highlights that gives night shots an ethereal and magic quality.