“Babs was undoubtedly rose-tinted in parts, but it was also heart-warming and a joyfully camp tribute to a national treasure.” 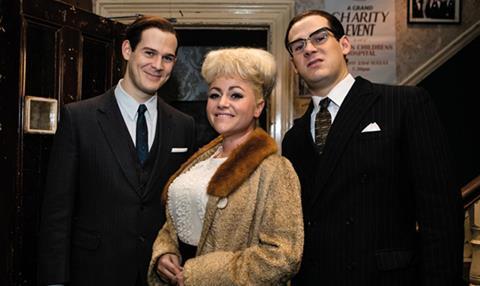 “Babs was undoubtedly rose-tinted in parts, but it was also heart-warming and a joyfully camp tribute to a national treasure.”
Gerard O’Donovan, The Telegraph

“Tony Jordan’s rare misfire was an old-fashioned stage play that did not for a moment translate to the screen. The piece was so kind to Windsor that she might as well have signed off on the script.”
Andrew Billen, The Times

“It was all just a bit too hagiographic. Did she make mistakes? Sure – but the only ones here were in her choice of men. Did the drama make mistakes? Mostly no – it was a fairly entertaining, if harmless, hour-and-a-half.”
Rob Epstein, The i

“No one could ever call her pretentious, but that’s exactly what this one-off drama was — so full of itself that you couldn’t help but laugh, in all the wrong places. The dialogue was pure ham sandwiched between thick slabs of soap.”
Christopher Stevens, Daily Mail

“A heartwarming and only occasionally cliche-ridden biopic by ex-EastEnders writer Tony Jordan. It may not be the familiar version of Windsor’s life – EastEnders isn’t mentioned and Carry On … only cursorily – but it’s such a standard showbiz arc you feel you’ve seen it all before.”
Chitra Ramaswamy, The Guardian

“Comedians can be the very worst people to travel with, too bothered about making cracks to learn anything about the places they’re in. Dara O’Briain and fellow comic Ed Byrne have a gentle humility, however, that allows them to be funny without poking fun.”
Matt Baylis, Daily Express

“They knocked about Kuala Lumpur for a day or two, before catching a bus and heading north. Dara donned giant headphones and looked bored out of his mind, and Ed told everyone he met how much he hated travelling. If there’s any point to this series, we’re yet to see it.”
Christopher Stevens, Daily Mail

“This was an exuberant mash-up of current-affairs spoof and hidden-camera prank show. It was hit-and-miss, as all sketch shows by law must be described, but was breezy enough to get away with its failures. Britain Today Tonight is by no means faultless but it’s the best use of Kayvan Novak’s gifts in years.”
Michael Hogan, The Telegraph

“The pranking is haphazard. Yet when it works, as in a down-the-line discussion with a London cabbie (real) and two Uber drivers (both voiced by Novak), you not only admire Novak’s virtuosity, but laugh out loud.”
Andrew Billen, The Times

“It was, strictly speaking, a little silly. But it was also gripping, and the cast’s enthusiasm was so palpable it was impossible to resist. I, for one, want to know more about how these cleverly wrought characters progress with their challenging new lives in the New World.”
Gerard O’Donovan, The Telegraph

“This historical drama has plenty of style. But all too often it suffers from an unfocused plot. Jamestown is let down by characters who are little more than caricatures, and schmaltzy moments.”
Finlay Greig, The i