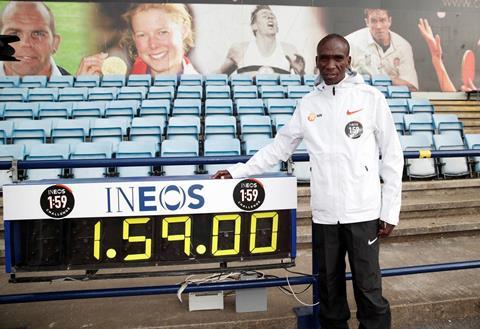 The live broadcast rights for long-distance runner Eliud Kipchoge’s attempt to run the first sub-two-hour marathon – the Ineos 1:59 Challenge – have been picked up by the BBC and Eurosport (pan Europe and pan Asia).

They join a list of more than 30 global broadcasters airing the challenge live in over 200 territories across the world.

BBC will stream it live via the red button and on the BBC Sport website in the UK, while Eurosport will air the run on Eurosport 2 across 54 European countries and 12 countries throughout APAC. It will also stream it live on its website.

Elsewhere, NBC is putting it out on its Olympic Channel and replaying it on its linear channel. NBC Sports Network is broadcasting it in the US.

As well as the linear TV broadcasts, the event is being live broadcast on YouTube.

The production of all the coverage is being taken care of by host broadcaster, production company Sunset+Vine.

Furthermore, there will be a “ground-breaking” second screen content throughout the challenge via www.ineos159challenge.com, including “interactivity that has never-been-seen-before in athletics coverage,” says Sunset+Vine.

Confirmed broadcasters of the Ineos 1:59 Challenge:

Worldwide: FlowSport (minus US & Caribbean)