Spooks writer and producer Chris Fry borrowed techniques from feature films to stage a thrilling action sequence for the final series of the BBC spy show. His secret? The ‘Russian Arm’. 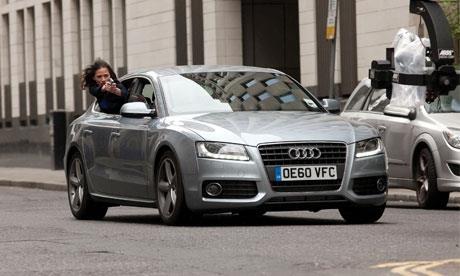 Summary: With fresh evidence of CIA agent Jim Coaver’s involvement in the recent attacks on MI5 and the government’s proposed partnership talks with Russia, Harry kidnaps his former Cold War colleague, but his interrogation doesn’t go to plan. Harry soon realises he’s been looking in the wrong place and Jim is possibly the innocent party. But if so, who is the real villain?

“He pushes harder on the accelerator, weaving in and out of the traffic. The van also speeds up and thumps through the middle of two cars.

“The van is right in front of them now. Beat. Erin leans out of the window – takes aim.

“Suddenly – the doors of the van fly open.

“A boy tumbles out, breaking, splintering, into the road ahead of them. Dimitri swerves instinctively – and they crash into a siding, the air bags inflating.

“The van races away, weaving through traffic.”

As a producer, when you first read the stage directions of an action sequence in a script, you want to make sure it is exciting and works for the story. But you quickly start to think about how you are actually going to be able to achieve it. In my experience of producing two series of Spooks as well as a number of years as first assistant director, it’s not necessarily money that restricts you; it’s time.

When facing the reality of shooting this scene, director Bharat Nalluri and I sat down and talked about how big we wanted to (and could) make it.

Bharat, who had come back to direct the final two episodes of the series he set up 10 years earlier, always brings big cinematic ideas to the table. He talked about wanting to use a piece of equipment he had worked with on the latest run of Torchwood, where he did a car chase on a beach with a helicopter circling above.

He was talking about a ‘Russian Arm’ – a gyrostabilised camera crane attached to a high-powered 4x4, which is operated by a team inside the vehicle.

The difference this time was that Spooks is set on the streets of London and we wouldn’t have the luxury of a vast beach in Wales. So the next task was to find a location where we could stage the chase but also have the space to use the Russian Arm.

With the short prep times in television drama, and with up to six weeks needed for permission to get a road closed in most London boroughs, we knew we would need to use all of our location manager Patrick Stuart’s resources, contacts and knowledge of London. It turned out to be the first thing we looked for and the last thing we secured, but that is often the way.

Bharat’s main brief was that he wanted somewhere built-up, but where you could keep the vehicles moving for as long as possible. He has found in the past that by the time you get the action vehicles up to speed, the camera rolling and everything in the right place, you have to start slowing down again to reset the sequence.

The next thing Bharat needed was the right stunt co-ordinator. He wanted Lee Sheward, an excellent co-ordinator who had just spent nine weeks in Madrid shooting a film using the Russian Arm, and the team that comes with it.

It was vital that we secured this team as there would be no point having the equipment without the people who knew how to use it.

The Russian Arm can operate at speeds of up to 120kph (75mph) and the vehicle comes with a crack team of driver, crane operator, camera operator and focus puller.

These guys, along with Lee, know exactly what the vehicle is capable of achieving and constantly push it to its limits.

We shot the sequence over two non-consecutive Sundays and, of course, we had a mixture of sun, rain and heavy rain. What I found incredible about using the Russian Arm was how versatile it was. It provides you with extremely dynamic shots, while allowing the action vehicles to travel at speed, but without the time-consuming re-rigging of cameras, which normally happens around car sequences.

I’m really proud of what we achieved and think the final results of the car chase are hugely exciting.

My feeling is that we shouldn’t be afraid of bringing in tools and methods people use in feature films, as it is sometimes surprisingly achievable with television budgets; you just need to make sure you have the right people doing it.

Frying tonight
Series one, episode two. Viewers were just settling into Spooks when Lisa Faulkner’s Helen Flynn was thrown into a deep-fat fryer. Bumping off an attractive, high-profile actress so early on jolted viewers and set the tone for the whole show.

Ros gets blown away
TV’s coldest heroine – she tried having emotions once, she didn’t like it – meets an explosive end in the series eight finale, trying to drag an injured home secretary out of a hotel before a bomb goes off. She fails.

The hissing traitor
Connie, who spent series seven appearing to be a sort of warm, friendly auntie of a spy, turns out to be a murderous double-agent. After strangling Ben with the wire from her bra, she is unmasked – and reacts by hissing like a cornered cobra.

Thames Barrier tenderness
Trapped in the Thames Barrier and on the brink of drowning in series five, Adam puts his hands on the face of a panicking Ros. It calms her down and hints at their future romance – plus he saves her life moments later, which probably helps.