War is hell, even if it’s a comedy drama 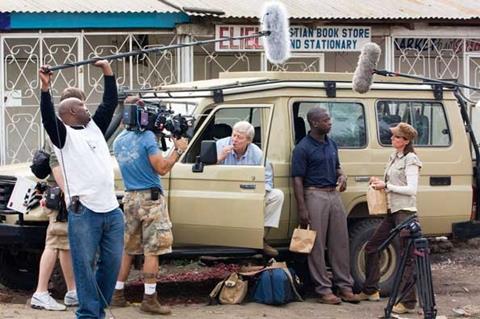 From a chance conversation 10 years ago with Jon Plowman (then head of comedy at the BBC) about what happens behind the scenes in television news, the idea for Taking the Flak was born: a comedy drama about journalists in war zones behaving badly.

After four years of options, rewrites and eventually giving up altogether, comedy producer Jon Rolph entered the picture. As a journalist, I had covered African conflicts, but Jon Rolph’s script skills and comedy sense kept our tales on track. Several years later, we had a commission from BBC2 courtesy of Roly Keating and Lucy Lumsden - and a brave agreement that our story about Africa must be filmed in Africa.

At which point we discovered that staging a fictional civil war can be trickier than covering a real one. Following BBC health and safety rules in Africa is a lot more difficult for a large cast and crew than for a small news team. We had to abandon our location in Kenya after the first episode, as the country was reeling from post-election violence. Our news colleagues in real flak jackets were the only BBC teams working in Kenya (the jackets our cast used had no Kevlar plates!).

After a nerve-wracking period of uncertainty, we moved to neighbouring, peaceful Tanzania, which has the same breathtaking Rift Valley scenery. But unlike Kenya, there is no local film industry. Not since John Wayne filmed the forgettable feature Hatari there in 1961 had anything other than wildlife documentaries been produced in Tanzania. Taking the Flak blazed a trail again, the government ensured that red tape was minimal, the town of Arusha gave us a warm welcome and team members based in Nairobi did the five-hour drive to join us.

Taking the Flak brings together the worlds of news and comedy and our two directors of photography did the same. Darren Conway - or DC, as he is always known - has covered dozens of conflicts worldwide and won the RTS camera operator award four times. Pete Rowe has an equally impressive CV in drama. Together they created the series style — a fusion of news and entertainment.

The extraordinary beauty of Africa is balanced by its logistical challenges: rutted roads, extremes of temperature and things that just don’t work. Enter Gayle Cope. If the Victorian explorers had had a BBC production manager running things, they might have found the source of the Nile a lot quicker, and had decent catering too. Gayle found and trained support crews from safari operators African Environments. Outfits that usually feed trekkers on Kilimanjaro did our catering. We had tents for shade and atmospheric “bush toilets” under canvas for pit stops. But “Team Flak”, a unique blend of UK, Tanzanian and Kenyan artists and crew, had a supremely happy shoot. We hope viewers will enjoy the world of Taking the Flak as much as we did.