So perfectly formed was Channel 4’s hit comedy upon its arrival in January 2015 that it was hard to believe this was the first collaboration between its writers/stars Sharon Horgan and Rob Delaney. 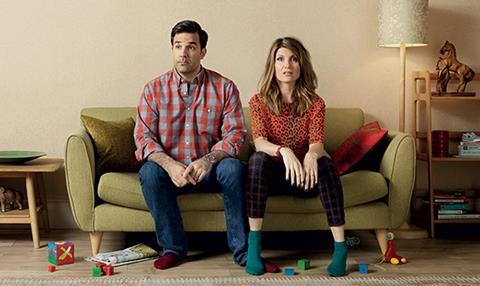 So perfectly formed was Channel 4’s hit comedy upon its arrival in January 2015 that it was hard to believe this was the first collaboration between its writers/stars Sharon Horgan and Rob Delaney.

The transatlantic pair famously hit it off over Twitter, spawning a friendship that spills on to the screen as ‘Sharon’ and ‘Rob’ go on an unintended journey into parenthood following the world’s longest one-night stand.

The combination of the well-honed one-liners of US comedian Delaney, a relative newcomer both to British screens and to acting in general, and Horgan’s narrative comedy experience on much-lauded BBC3 comedy Pulling proved irresistible.

From the start, viewers felt in safe hands: here were real people, raw emotions, a story to invest in – and, crucially, big, often filthy, laughs every few seconds.

“Catastrophe is a masterclass in comedy,” one judge declared. “There’s something brilliant about the uncontrived honesty of these characters and a modernity to it that I just love.”

In an exceptionally fertile period for comedy, C4 struck gold. It clearly knew what a rare gem it had on its hands, recommissioning it almost instantly and getting series two to air within 10 months.

“It’s got it all – original and honest characters, with sharp, funny dialogue – and never slips into the obvious,” said one judge. “It’s already a classic British sitcom.”

As well as loving its winning mixture of comedy and pathos featuring strong and believable characters, the judges marvelled at the production of this two-hander, in which nearly every interaction between its stars, Peter Kay and Sian Gibson (and, memorably, Reece Shearsmith), happened within the claustrophobic confines of a car.

Poignant, true and grounded, Mackenzie Crook’s quiet gem was universally praised. The judges highlighted the warm chemistry between Crook and Toby Jones, its moments of poignancy and its breathtakingly beautiful shots of the English countryside in summer. “It’s so incredibly still,” marvelled one. “I could happily just watch Crook and Jones walking through a field.”

Inside No. 9
BBC Comedy Production London for BBC Two

Reece Shearsmith and Steve Pemberton didn’t put a foot wrong in the second set of their twisted tales, taking viewers from laugh-out-loud comedy to exquisite tragedy and horror via a 17th century witch trial, a cramped European train carriage and the CCTV screens of a call centre. “They can take me anywhere and I can believe them,” one judge declared.

People Just Do Nothing
Roughcut Television for BBC Three

This spoof pirate radio documentary is, in the words of one judge, “a work of art”; indeed, one of their peers around the table was fooled into thinking it was real the first time they saw it. Everything rings true in this slow-burner, right down to the authentic performances of a cast who rarely break character even outside the show. As a bonus, it is properly funny.

“I laughed like a drain,” said one judge of Leigh Francis’ latest collection of grotesques, skits and spoofs, including the titular lothario, the Kardashians, the Hairy Bikers and the regulars of This Morning. The judges said this was a particularly consistent sketch show that was acutely observed, well written and funny