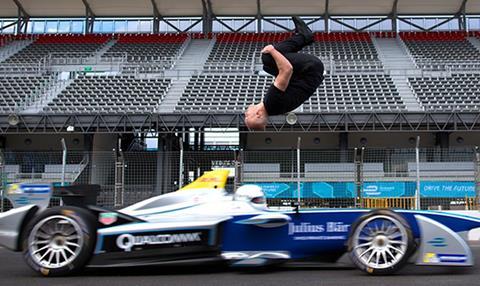 The all-electric racing series was on a mission to expand from its TV coverage and establish a major footprint across social platforms when Little Dot Studios came on board for its second season.

The ambition was for Formula E to appeal beyond its existing followers, with gaming fans a particular target. Prost vs Senna was the first in a series of pilot gaming events across the UK streamed over Twitch and YouTube, while Formula E drivers went head to head with members of the public on Xbox’s Forza Motorsport 6. These paved the way for the Race Off Pro series, a virtual championship in which players competed to win a place in the final race of the season.

Praising a “truly original way of bringing a very new sport to a digital-savvy audience”, judges declared this was “a brilliant partnership where both parties truly understood the value of each other”.

THE INDESTRUCTIBLES
Factory Media for Dave

Seeking a high-adrenalin show for Sunday nights, Dave and Factory Media created this 12 x 30-minute series, plus 110 short-form digital episodes, in which a team has three days, two props and £1,000 to stage a stunt, performed by world-class athletes and inspired by short-form virals. Also on board was Casio with a product placement deal for its G-Shock watches.

Sky News bid hard to become the only UK news provider on Snapchat’s new Discover service, which was set up for a young audience to watch and share videos. Led by young producers and designers, Sky News journalists including Alex Crawford and Sam Kiley now regularly fi lm Snapchat-only stories.

Princess Productions won a competitive tender for this 12-hour charity telethon for the digital age, which harnessed the popularity of YouTube stars. Joe Sugg, Zoella and Caspar Lee were among those joined by celebrities in this live streaming party, which clocked up 1 million views across the event and raised more than £150,000.

WHAT NOT TO DO
Scope for All 4

Following its ‘End the Awkward’ campaign of 2014, Scope again worked with Channel 4 and The Last Leg presenter Alex Brooker to create this 6 x 3-minute series, which used hidden cameras to expose onlookers’ awkwardness around disability in social situations. Cross-promoted on air, the shorts have attracted more than 1.2 million views.