“A strong, clear brand that continues to deliver fresh and creative programming” 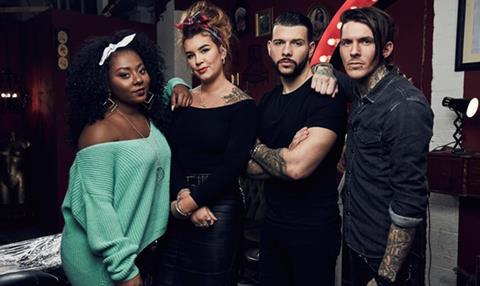 Indeed, the 16-year-old channel maintained its strong position among 16 to 34s with its mix of US acquisitions
and original comedies, dramas and formats.

Looking ahead, E4 has ordered hypnosis dating format First Impressions from Wall to Wall and linked up with Netflix for The End Of The F***ing World, a dark comedy drama from Clerkenwell Films based on a series of comic books.

Witless and This Country were also bonafide comedy successes, while Murder In Successville and Asian Provocateur continued to take entertainment in new directions.

Dave’s original comedy challenge show Taskmaster came into its own in its second series, drawing both critical claim and record audiences, while new formats Unspun With Matt Forde and Dara O Briain’s Go 8 Bit were well received by viewers.

Reality was key for MTV UK this year. The channel had great success with a local version of US doc series Teen Mom, which followed five teenage girls through the trials and joys of mother hood.

Meanwhile, the ever-popular Geordie Shore was on good form, with specials Why Aye Love You and Big Birthday Battle both performing well.

Global youth brand Vice Media launched Viceland in the UK in September 2016. Its programming slate built on the US success of shows such as Gaycation and Weediquette with originals such as Bong Appetit and Jamali Maddix’s Hate Thy Neighbour.

The channel also took its first steps into scripted with partially improvised sitcom Nirvanna The Band The Show.