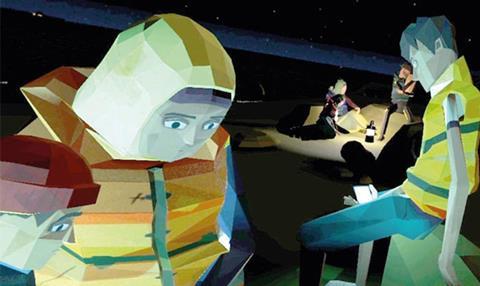 Created for the Oculus Rift VR headset, this BBC and Aardman collaboration followed a Syrian family’s attempts to cross the Mediterranean.

Based on research conducted by experts from BBC News reporters to United Nations staff, the animated experience was designed to encourage greater empathy towards the plight of migrants.

Opening on a Turkish beach where a family waited to make their latest attempt to reach Europe, the 10-minute experience made use of a large motioncaptured cast that reacted to the viewer’s eyeline, and used dynamically spatialised binaural audio.

The producers also had to research seasickness and find innovate ways to recreate the sensation of being on a boat at night - but without inducing nausea.

The results paid off: the Connected Studios experience was used by the BBC when demonstrating its work in the Houses of Parliament, at Sheffield Doc/Fest and in the UN in Geneva.

“An inspirational and immersive story that gets behind the headlines to deliver a truly effective and emotionally charged experience,” said one judge.

Another added that it was “ground-breaking public service content memorably executed”. This was Aardman’s first VR project, but it is in talks with the BBC about where to take it next.

6X9: A VIRTUAL EXPERIENCE OF SOLITARY CONFINEMENT
The Guardian and The Mill for theguardian.com

The Guardian team worked closely with a pair of academic psychologists to parachute viewers into an American prison to demonstrate the effects of long-term solitary confinement.

The photo-realistic environment, created in collaboration with The Mill, offered audio stories from seven former inmates, triggered by looking at objects including the concrete bed, desk, toilet and books.

EASTER RISING: VOICE OF A REBEL
Crossover Labs and Vrtov for BBC Taster

Built on the unearthed cassette recording of Dubliner Willie McNeive’s recollections of his time spent fighting the English as a 19-year old in 1916, the BBC’s first VR documentary commission was given a distinctive ‘vorticist filter’ - a style of art popular at the time.

A theatre consultant helped to shape the immersive experience, which included an ambush and a barricade.

Backed by a specially commissioned score and shot using a bespoke motion control rig, the piece
was enhanced by the addition of ghost-like trails streaming behind dancer Tamara Rojo.

In this ground-breaking, multi-sensory cinematic experience, viewers stepped into the suit of an astronaut negotiating a mission that involved leaving the safety of the International Space Station.

The 15-minute, fully interactive experience was boosted by haptic feedback and heart rate monitors as users witnessed sights including the Aurora Borealis and the Sun setting over the Earth.

Viewers shared the experience of the UK’s first ESA astronaut Tim Peake as he descended to Earth in the Soyuz spacecraft at speeds of more than 27,000kph.

Commissioned by the Science Museum in London, the photorealistic experience was created following consultation with organisations including Nasa on both the visuals and accompanying script.