Click to register for a spot on 7 May Zoom event 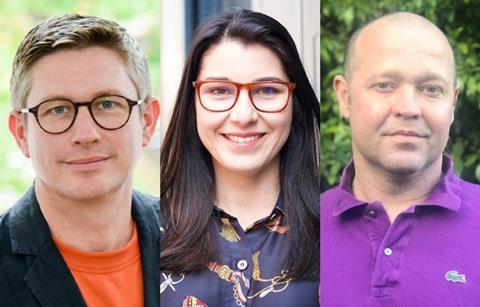 In the first of a series of subscriber-only Zoom events Tim Harcourt, Ana de Moraes and Charlie Bennett are to examine how they are operating under the current restrictions and what work is underway to ensure they are well-prepared for when lockdown lifts.

The hour-long live session will include the opportunity for users to submit questions to the panellists and takes place on 7 May at 2.30pm.

It will be made available to view on-demand via broadcastnow.co.uk

If you have any questions for the panellists - please email alex.farber@broadcastnow.co.uk

Tim oversees unscripted development, selling to UK broadcasters, as well as several productions for Studio Lambert in the US. Since joining the company in 2012 he has devised many of Studio Lambert’s formats including the award-winning Gogglebox.

Ana joined MultiStory Media in 2018 as group creative director, tasked with overseeing development across all genres, broadening the company’s range of customers and focusing on the creation of returnable formats. In her first year, she was responsible for developing MultiStory’s first BBC1 and SVOD commissions.

Before MultiStory, Ana’s career included roles at Twofour, BBC Studios and Twenty Twenty. Some of the award-winning shows she’s developed include First Dates, The Choir and The World’s Strictest Parents.

Since joining Talback in 2016, Charlie has co-created award-winning ITV series Harry’s Heroes and its forthcoming Alan Carr’s Epic Gameshows, Netflix reality hit Too Hot To Handle and Comedy Central’s reboot of Your Face Or Mine.

Before that, he was at Zeppotron for many years, working on Would I Lie To You? and developing shows with comedians including Lee Mack, Frankie Boyle and Charlie Brooker.