He has been with the broadcaster for 24 years 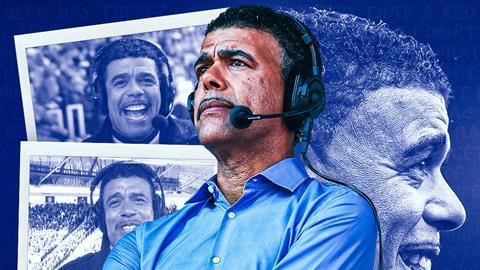 Sky Sports has announced that Chris Kamara will be leaving the broadcaster at the end of the football season.

Kamara has been with Sky for 24 years, and became a fan favourite on Soccer Saturday for his exuberance and humour. He has also worked on Soccer AM and Goals On Sunday with the broadcaster.

The 64-year-old recently revealed he had developed a speech apraxia disorder alongside an existing thyroid issue. However, this decision may not be related to that issue, as he revealed that his health is improving shortly after announcing his departure.

Big thanks to everyone once again for your best wishes today👌🏽I had a tear in my eye 😢 when Unbelievable Jeff got choked up on screen.I can’t thank Sky enough for that wonderful tribute 👏🏻👏🏽 The good news also is ? I am nearly there in terms of my health 🥳 had amazing help 👍

Kamara said: “My long career at Sky Sports has never felt like work. I’ve spent 24 terrific years at Sky, and leave with the best of memories.

“My time on Soccer AM, Goals on Sunday and, of course, on Soccer Saturday with Jeff has been - to coin a phrase - unbelievable. I’ve had the time of my life, and look forward to tuning in every Saturday as a fan.”

After 24years at Sky Sports we have announced my departure.I have loved every minute & the memories will live with me forever.Working with Jeff & the boys has been Unbelievable!And the special days on Goals on Sunday with Ben Shephard who has become a great pal. I’ve had a blast!

A Sky Sports statement read: “After 24 brilliant years at Sky Sports, including many years as a star of Soccer Saturday, Chris Kamara is leaving the show at the end of the season.

“The Soccer Saturday show paid tribute to him this afternoon, and he leaves with our thanks and very best wishes.”

Gary Hughes, Sky Sports director of football, added: “Kammy has been a Sky Sports star. Everyone has a favourite Kammy anecdote or highlight, and the tribute we paid to him on air this afternoon really shows the special place he has in the hearts of our viewers.

“We’ve been so lucky to have him, and he will always be part of the Sky Sports football family.”