It will create the first ePremier League event to be staged outside of the UK. 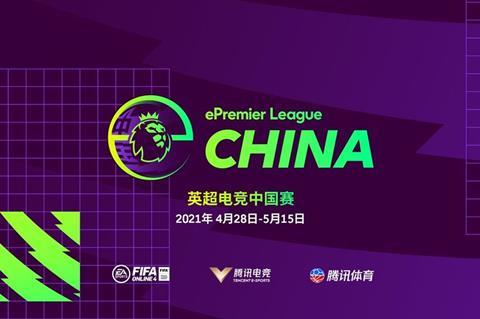 The Premier League has partnered with Tencent Sports, Tencent Gaming and EA Sports to launch an ePremier League event in China this month.

Each of the 20 top flight sides will be represented on EA Sports FIFA Online 4 by one top Chinese gamer and a hand-picked content creator or influencer each. These include esports commentator Guan Zeyuan and the well-known FIFA Online influencer Shen Rongjie.

Starting 28 April, the tournament will feature four groups of five teams until 8 May which will decide who qualifies for theknockout stage and finals on 14-15 May.The first stage will be entirely online, with the knockouts and final set to be held at Wisdom Bay, Shanghai.

It will be broadcast on Tencent Sports, Tencent Video and Tencent News, as well as Huya, Douyu and Yizhibo, and comes as sports organisations around the world look to esports as a way to connect with younger fans.

Premier League commercial director Will Bass said: “The EA Sports FIFA Online 4 video game series is one of the key channels through which fans in Asia can engage with Premier League clubs and players.

“After three successful ePremier League seasons in the UK, it is exciting to now be able to take this overseas for the first time and particularly to China – a hotbed for gaming and football.”

This news comes as the IOC also moves into esports, likely to reach younger viewers. The Olympic Virtual Series will run from 13 May to 23 June this year, with anyone able to take part in esports related to baseball, cycling, rowing, sailing and motorsport.