Prime Video releases All Or Nothing: Arsenal trailer

You can watch the All Or Nothing: Arsenal trailer here 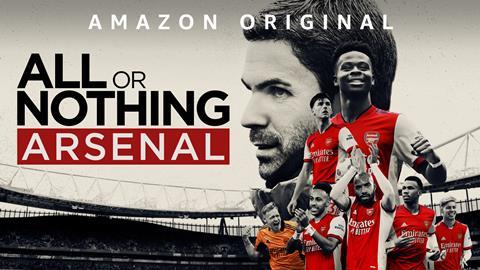 Prime Video has released the trailer for All Or Nothing: Arsenal.

The latest installment in the series, which has also covered Arsenal’s north London rivals Tottenham and Premier League champions Manchester City, will premiere on 4 August. The first three episodes will come out then, followed by more episodes weekly until 18 August.

The eight-part series follows the Arsenal side during the 2021/22 season, with Mikel Arteta’s side recovering from losing its first three Premier League matches to challenge for Champions League football before ultimately falling short to fierce rivals Spurs. The documentary will also follow the Gunners’ players away from the pitch as they take on their daily challenges as elite athletes.

Academy Award- and BAFTA Award-winning actor and Arsenal fan Daniel Kaluuya (Judas and the Black Messiah) will narrate the series. It is produced by 72 Films, and executive produced by Mark Raphael, Clare Cameron and three-time BAFTA winner John Douglas.