The Wildscreen Festival celebrates excellence in natural history film-making. Four shortlisted film-makers discuss the techniques they used and the challenges they faced. 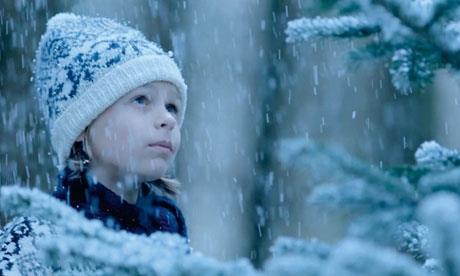 Why did you adopt the layer technique for this project?

Lars Ostenfeld It was important to me that the human story came first and the technique second. We have to feel for the tree as if it were a human; for example, the little fir tree growing up, which is a scene we have seen many times. How could we keep the fairytale and the magic alive? The tree is fi lmed in silhouette at night while it grows. Disney once said that a good main character must be recognisable in silhouette.

What challenges does it pose and how did you overcome this?

LO I was lying under a table with a small hole and soil over it. I pushed 10 different sizes of the tree up so it was more of a character than a tree that grows. It moves in a different way. I believe when we started felling the tree we got an idea of how nature works. At the same time, I was lying in the grass with a fishing line, which helped the tree move in the wind. Also, it was important that the ‘birth’ of the tree should be seen from its point of view. We played with the image we had of life/birth and death, a dark corridor with light at the end.

What did you use to achieve the techniques and what new technology is available?

LO We pushed a large Red camera through the hole and pushed the soil aside. The fi rst tests failed because the soil could not be pushed aside gracefully. We constructed a half-round glass ball to put over the lens and at the same time pushed the soil away when we pressed the camera up. With a Canon 5D Mark II, we solved other tasks: we packed it into a round Styrofoam box, made a hole and covered it with leaves and let it roll down a hill, as it was from the point of view of a rolling pine cone. In fact, we made The Fir Tree in a very old-fashioned way to put the magic back into nature films.

What is the latest kit you have used to fi lm at night and what in particular were its strengths?

Dick Colthurst We used Bradley cam-balls, which have day and night capability, switched in our studio tent. We’ve also used the Canon XF105 on survival shows such as Alone In The Wild for Discovery, which is very impressive on its night-vision setting.

What is the greatest challenge in fi lming at night and how do you overcome this?

DC The biggest difficulty is getting enough range on the infra-red lights when using fixed-rig cameras in the wild. The first time we used a fixed rig was on Elephant: Life After Death and we were able to light only the carcass. On Hippo: Nature’s Wild Feast, we adapted the normal IR lights to allow us to see twice as far and pick up animals coming to the carcass much further out.

The other challenge filming at night in the African Bush is all the wildlife looking for an easy meal by picking off the crew. We have armed guards on duty 24/7 but the long walk to an isolated toilet tent in the middle of the night is still an unnerving experience.

What have 3D wildlife productions to date proved about the technology’s strengths, and its suitability for the genre?

Andie Clare For me, this genre delivers on the original dream of 3D. It takes you to an exotic or unfamiliar place and makes it more real. Other genres are intrinsically ‘unreal’ – the stereo illusion is eroded when we know what is presented to us can’t be real.

What improvements have been made? What could you do now that maybe you couldn’t do previously?

AC Inition built a bespoke rig for our River Monsters shoot in The Okavango Delta in 2011. This rig was light enough to be hand-held by the camera operator, and used two perfectly matched zoom lenses that enabled us to keep moving with the action and capture dynamic sequences without having to change lenses.

How do you keep your kit streamlined for 3D fi lming in remote areas?

AC With great difficulty. Filming in 3D with a rig does require significantly more kit than a 2D shoot. Remote locations require the crew to travel with spare and repair options. There were a lot of tough decisions to make on the kit list and many meetings and negotiations over what to take.

What would be your dream animal/setting to capture in 3D and why?

AC Where 3D could take the audience on an experiential journey. Somewhere authentic, dark and seductive. The Congo?

Sir David Attenborough, Atlantic Productions’ head Anthony Geffen and Sky 3D had already worked together on the Baftawinning Flying Monsters and the Bachelor King 3D, but for their next project, they were fascinated by the idea of taking 3D into the macro world of plants and capturing it in all its beauty and drama.

The challenges facing them were enormous, demanding the development of new technologiesand techniques, which they worked on with a group of specialists and their post-production house, Onsight.

3D is infinitely more complicated than 2D in terms of cost, logistics, personnel and time, so they chose to make the film at the Royal Botanic Gardens at Kew, which houses nearly 85% of all plant species.

Nine different types of camera were co-ordinated by series cameraman Tim Cragg. They were used across the series to capture the range of stories and subjects on offer, including fi lming panoramic time-lapse shots 80 feet up – quite a feat.

As the technology to shoot 3D in extreme close-up didn’t exist, Atlantic had to create it, devising special computer-controlled rigs to capture the tiniest details of the plant and animal structures.

The crew also had to be able to assemble at the drop of a hat to capture one-off events, such as the flowering of the titan arum, which happens only once every seven years.

While the stereoscopic timelapse sequences could all be shot at Kew, some macro 3D cinematography of plants interacting with sometimes poisonous animals had to be fi lmed in a specially constructed studio, and required supreme co-ordination and nerve.

The results have been hailed as astounding. “The whole experience in 3D is just entrancing and hypnotically beautiful,” says Attenborough. Geffen adds: “3D brings a dramatic, sometimes overwhelming, perspective, allowing you to step inside a new world; you don’t just see it, you really ‘feel’ it.”

For director Martin Williams, Kingdom Of Plants was an exciting adventure that has succeeded in creating a view of nature that is unprecedented. “Images like these have quite simply never been seen before.”