TV Critics: Catastrophe; The Secret Surrealist; One Born Every Minute

It was a dedication to Carrie Fisher. And then those rising tears became real too. 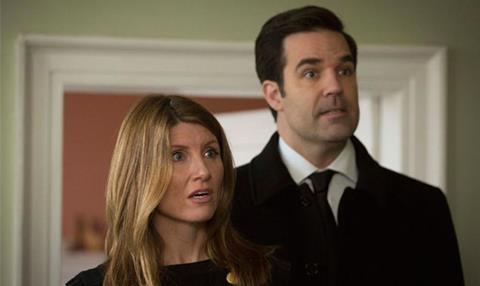 Usually when something sad happens in a comedy or drama, we get to console ourselves with the knowledge that it’s not real. But, just as the screen faded to black, we were hit by another small bullet of emotion – a real one.
Catherine Gee, Daily Telegraph

That the comedy – like many comedies right now, it frequently leans towards tragedy – has sustained itself way beyond its original premise is a credit to the acidity and frankness of the writing.
Sam Wollaston, The Guardian

Sharon complained at the beginning she did not feel upset enough at her bereavement. By the end, she, and we, had made up for the deficiency. Brilliantly done, though.
Andrew Billen, The Times

To us, [Desmond Morris] belongs with the likes of David Attenborough and David Bellamy: a presenter with a scholarly background and some hit books to his name. Rather fewer people think of him as a pal of the Spanish surrealist Joan Miró, the sculptor Henry Moore and the painter Francis Bacon.
Matt Baylis, Daily Express

Morris had just sold a painting called The Gathering, in which all his biomorphs, scores of them, assembled for a “dream-like ceremony”, the meaning of which he could not fathom. Let me give you a clue: Morris, although he looks almost as young as when he presented Zoo Time in the Sixties, is 89.
Andrew Billen, The Times

One Born Every Minute shares a common space with 24 Hours in A&E, Channel 4’s other smash-hit fixed-rig documentary, but if the latter can sometimes be a panic-inducing reminder of the random fragility of life, the former is usually much more joyful, exposing the vulnerabilities of those involved, yet always showing people at their best.
Sam Wollaston, The Guardian