There was the inevitable parade of enormous, curvy and absurdly thin television displays, boasting Oled, Qled and Uled technology, and showing demo footage of flowers, frogs and underdressed women. 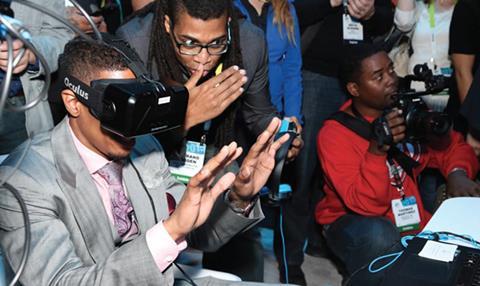 But I was transfixed more by the modest stands showing actual Ultra High Definition (UHD) content – from actual content providers. Netflix, Amazon, YouTube and others are already partnering with the major manufacturers to provide streamed 4K programming. Not a traditional broadcaster in sight.

The shock for broadcasters is that online services are now able to commission and deliver content of a higher quality than traditional providers. The race is now on to get into the UHD game.

Meanwhile, if 3D was almost dead, it’s surely been finished off by virtual reality. VR has been around for decades, always carrying a hint of Max Headroom absurdity. But with last year’s $2bn (£1.3bn) acquisition of Oculus by Facebook, the game has stepped up. Without even a product on the consumer market, Oculus is producing work of staggering quality. It is also providing the VR engine inside Samsung’s new low-cost Gear VR.

Don’t mistake this for VR gaming – though there’s plenty of that too. What’s arresting for television- makers is the emphasis from Oculus, Facebook and Samsung on non-interactive yet deeply immersive experiences. I was a sceptic but I found them compelling.

The third big trend was around the internet of things: data-driven connected devices for every aspect of our lives. Some are plain daft – such as smart beds, belts and socks – but not those around health and fitness.

This matters for three reasons. First, the smartphone is now our sixth sense, controlling our lives. Second, it raises huge issues about personal data – and who controls it. And third, we have no idea whether populations living in a sea of analytics will start to expect something different from broadcasters.

These are mighty trends – and they could signal significant change for broadcasters. But another, more subtle, trend this year was that there was no single standout player – not even Apple, which never attends CES but normally dominates the agenda.

You have to admire an industry that’s so fragmented but can still shift fast to create increasingly better quality products in vast numbers for perceived new markets. Will they be like a murmuration of starlings: twisting, turning and then gone? When the view clears, what will we be looking at? Whatever it is, it will be in Ultra HD.