A multiple winner this evening, E4 achieved its highest ever share of 1.99% in 2014 thanks to a sparkling mix of home-grown originations and super-successful acquisitions. 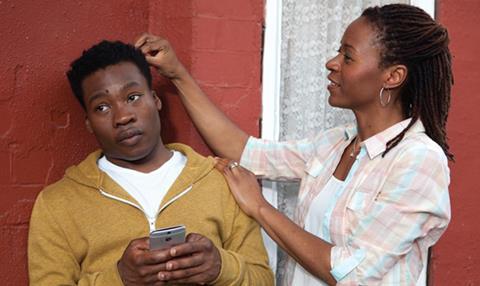 That performance has been recognised by Channel 4, which has allocated it an increased budget for 2015.

A distinctive mix of scripted and unscripted commissions led the way, including the stylish thriller Glue and Bad Robots, which freshened up the prank show genre. Russell T Davies’ Banana (pictured) impressed the critics, while Jessica Knappett’s Drifters returned with 27% more viewers and Troy became an established magic brand.

Hollyoaks was also on song, winning Best Soap at the British Soap Awards for the first time, and establishing itself as one of the most digitally savvy shows on British TV. Another old stager, Made In Chelsea, made a trip across the Atlantic and is now attracting its largest ever audiences.

E4 had a cracking year in terms of acquisitions. The 100 smashed its record for a new series launch, bringing in 2.52 million viewers, and the channel now has hugely a reliable slate in the shape of Brooklyn Nine-Nine, New Girl and The Tomorrow People.

The little matter of The Big Bang Theory delivering audiences of up to 3.1 million doesn’t hurt either.

The channel is a long-term success story, having improved its share in each of the past 11 years.

BBC Three
Last year’s Channel of the Year impressed again, with factual drama Murdered By My Boyfriend arguably shading Our World War as its standout piece of content. Hard-hitting factual was also strong, with series such as Life And Death Row.

CBBC
Drama was the standout genre for the Best Specialist Channel winner, with the likes of The Next Step, The Dumping Ground and Wolfblood performing well. The latter topped the channel’s ratings with an average audience of 226,000. Plus, a push on coding saw the creation of the Make It: Technobabble game-maker and the Appsolute Genius With Dick And Dom competition.

Dave
Storage Hunters UK demonstrated that a domestic remake can match an imported smash, while a raft of quirky commissions also proved Dave’s progress. The distinctive Ross Noble Freewheeling and Alan Davies: As Yet Untitled led the way, and Suits remains a big-hitting acquisition.

Sky Atlantic
Penny Dreadful, Mr Sloane and especially Fortitude signalled the vast ambition of Sky Atlantic’s originations, and it continued to benefit from the juggernaut that is Game Of Thrones. The channel is now genuinely talked about, helped by its distinctive brand of programming, such as True Detective.