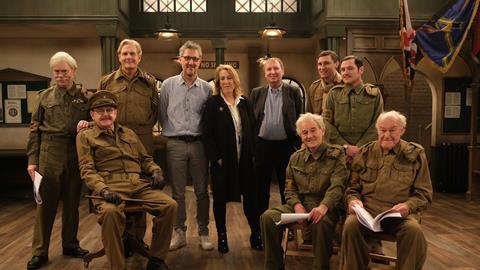 Armed with the scripts to three lost episodes of the much-loved sitcom Dad’s Army, we decided to bring them back to life and delight its legion of fans, says Candida Julian-Jones

Turns out Forrest Gump’s mother wasn’t wrong. Life is, indeed, like a box of chocolates – you never know what you’re gonna get.

Being a freelance producer is often comparable. Some meetings promise jobs that appear tantalising, like exquisite handmade truffles, but turn out to be disappointingly ‘not as advertised’, or just really hard, leaving you with an unpleasant aftertaste. 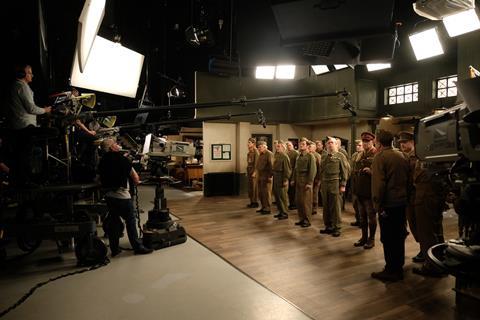 After meeting executive producer and owner of Mercury Productions Tom Webber in July 2018, I realised I had fallen upon a small, perfectly formed choc box of delights: I was being asked to produce Dad’s Army: The Lost Episodes and not one but three of them, with the original scripts from series two, written in 1969. How rare and how lucky.

The BBC aired the black-and-white series 50 years ago, repeated a few of them once, and then repurposed some of the tapes, wiping three of the six episodes. However, the original scripts were happily intact and residing in the BBC’s archive.

Over the autumn and winter of 2018, casting director Catherine Willis carefully pursued the key cast’s agents for speculative dates (this was very tricky), while I tried to pencil in studios for a three-week window to record the shows and leave the sets standing (also tricky). 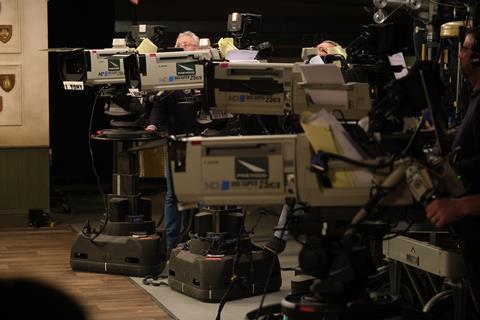 The usual chicken-and-egg scenario of getting actors to commit before an official green light rumbled on. Also, there was no possibility to amortise costs for future series, and building a set from scratch made for more expense.

Luckily, we had production designer David Ferris and, like many of his tribe, he always finds a way – his Aladdin’s cave of a garden shed is legendary.

With the help and support of UKTV head of production Kerry Waddell and head of scripted Pete Thornton, the show received the green light in November last year and a studio at Pinewood was booked, allowing David to deliver exact replica plans for the familiar Walmington-on-Sea church hall and office.

Then the week before Christmas, the deals were finalised for the remarkable seven key actors for our new Dad’s Army.

All supporting artists for the nonspeaking but intrinsic members of the background platoon were employed using the services of Khaki Devil, a like-minded group of historians, experts and collectors led by Taff Gillingham and Kev Smith, who hire themselves out for film and TV.

Candida Julian-Jones - My tricks of the trade

Matched in age as closely as possible to the original platoon, they arrived for rehearsals with their own costumes, props, decommissioned weapons and an impressive army-like discipline. Taff also acted as military advisor to our cast and duly drilled them, ruthlessly.

The ‘platoon’ arrived from all parts of the country, so Taff found a local scout group with a large hut that was available for their accommodation. They enjoyed bivouacking for the two nights and running up to the studio each week.

When I asked after their comfort and health, Taff told me it was all part of the experience: they all had camp beds and excellent facilities for making tea and bacon sandwiches. They had space for practicing Home Guard drills and were a few minutes walk from two excellent pubs. “No hotel could offer all this,” he said.

Studio sitcoms have a peculiar TV grammar, as a hybrid of theatre and television. The main sets – built in a theatrical, three-sided proscenium arch-style to face the live audience – are obscured for the most part by the equipment required to record the show.

At least five pedestal cameras and four booms stretch across the front of the sets. This, however, does not detract from the opening-night-of a-new play feeling of the artists, audience and crew alike on each studio record evening.

Palpable joy emanated each week from our studio audience, confirming the stellar main cast had brilliantly captured the essence of the much-loved Dad’s Army characters and original actors.

We have all been involved in recreating a delicious slice of TV history with the enduringly funny half-century-old scripts, and it is something we have shared and will remember with affection.

A MODERN TAKE ON AN OLD PRODUCTION 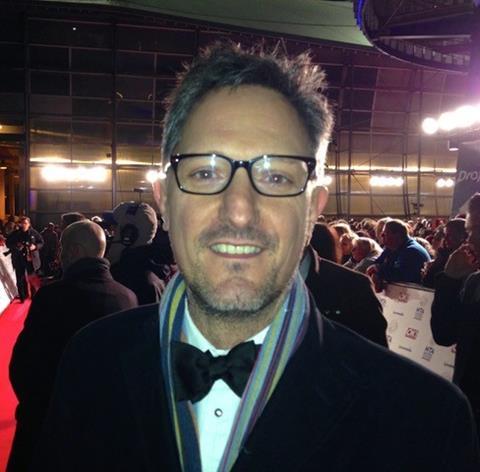 “Make it look and feel as much like the original as possible, shot in exactly the same way – but not black and white 4:3. We need it HD, colour and 16:9.”

Out went plan A and thus began the Dad’s Army journey. I asked for the post-production paperwork, which was found in the form of the original camera scripts, with hand-written amendments from Dad’s Army writer David Croft and producer Harold Snoad. This was pure TV history and a significant responsibility. It all started there.

SOURCES FOR THE SCRIPTS

David and co-writer Jimmy Perry had published the scripts of all six ‘lost episodes’ – the recordings of three had, of course, subsequently been found – so we now had two sources, which differed quite a lot. An off-air audio recording of the

A Stripe For Frazer episode, which was the most accurate record, had also been found and turned into an animated version.

Then Mercury Productions’ Tom Webber sent me an email that contained a location filming script – different again. We were keen to be as true as possible to the original – but which original?

Where there was a choice, we opted for the funniest, knowing that’s what Jimmy and David would have done. I knew Jimmy well, originally from sitting next to him at Ronnie Barker’s summer drinks party, and later I co-wrote with him. 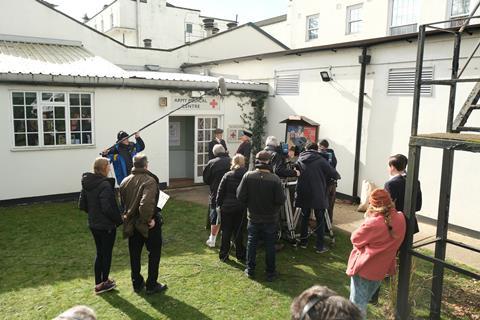 A contemporary sitcom can have 600 shots in a half-hour, but Dad’s Army more typically has 250. This made for a trickier editing process as we had mostly wider shots available, in keeping with the style of the original. Close-ups were used sparingly, and generally there were only two takes of any scene.

And how would the change in aspect ratio affect how the show was blocked? I was able to be as faithful as anyone could reasonably expect – I hope.

I reverse blocked as far as possible from someone else’s 50-yearold camera scripts, adjusted to accommodate elements we needed to prerecord for time and safety and used black-and-white photographs from the rehearsals and publicity stills.

All the time, I had Jimmy’s voice in my ear, shouting: “What I can’t stand is when an actor says to me, ‘My character wouldn’t say that’ – it’s not their character, it’s mine!”