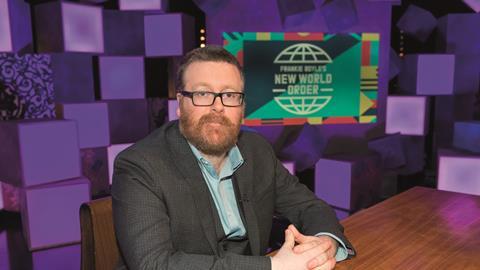 Frankie Boyle: ‘Comedy is a type of acceptable rudeness’

Are you concerned about a comedian’s right to offend or comment on sensitive subjects in the current cultural climate? Can you depend on broadcasters to fight your corner if controversy arises?

Broadcasters give more support than you would predict, to be honest. I think they understand that, to some extent, scandals about jokes are often proxy attacks on the broadcasters themselves. The press now seems equally at home denouncing ‘safespace comedy’ and comedy itself.

There are a lot of misconceptions about comedy; people often confuse it with the way they use humour in their own life, as small talk.

That five-minute jokey preamble at the start of a podcast is how most people use comedy in their own life, as a sort of politeness, and comedy as an art form is ultimately not polite. On a basic level, it’s sentences, or scenes, that end in a surprising way; it’s hard to surprise people politely: “Excuse me, terribly sorry to bother you, boo!”

Even something like a PG Wodehouse novel is profoundly rude about people in a way. Comedy is a type of acceptable rudeness, and people pointing out bits they personally find rude verges on tautology.

There’s also a thing in Britain generally, where, maybe as a postcolonial hangover, people think that their personal tastes and preferences somehow constitute the moral grammar of the universe.

Do producers and broadcasters need to put new measures in place to protect comedy talent from criticism?

I don’t see how they can. There’s a case for saying that the talent need to protect themselves from criticism.

There was a fashion a few years ago of stand-ups doing routines about how much they Google their own names. That’s surely a staring contest with the unblinking Third Eye of Madness.

“I worry that when a comedy gets monstered on Twitter, next year that slot will go to Dion Dublin’s Beekeeping Challenge”

The industry, and maybe even the viewers, need to think about their responsibilities when it comes to criticism.

I’m a comedy fan, and when a new show launches and it gets monstered on Twitter, I worry that next year’s commission for that slot will be Dion Dublin’s Beekeeping Challenge or Divorced From My Dog.

There are lots of non-comedy formats for which expectations are lower and ratings higher, and it baffles me when the press lead on poor overnight ratings for a new show. Half the time, even new shows consolidate pretty well, but by then they’ve already had their headline.

If I was making my living commenting on comedy, I’d be thinking about whether it was in my interests to be talking this (ultimately fairly niche) industry down. The decision-makers at broadcasters are only human. There are safer bets than comedy, and if we’re not all a bit more supportive, channels will start taking them.

How do you go about finding talent for BBC2’s Frankie Boyle’s New World Order?

I’m always on the lookout myself, and the producers will recommend people they’ve worked with on other things.

Miles Jupp tugged my coat to Kiri Pritchard-McLean last year. I was watching her set on YouTube and literally texting my producer by the fourth joke. People think it’s hard to break into panel shows but, trust me, if you reach a certain standard, there’s a real hunger for new voices.

Do you think broadcasters are doing enough to nurture comedic talent?

There’s certainly more opportunity than there’s ever been. When I started, you could hope to be on Have I Got News For You, Never Mind The Buzzcocks or The Stand Up Show, and that was pretty much it.

I wonder if terrestrial broadcasters are doing enough alternative stuff though; Sally4Ever was great, but I was thinking, ‘Isn’t this supposed to be on C4?’. I worry that it will get to a point where all the interesting stuff is assumed to be really niche, and harder for audiences to find.

What first got you into making TV comedy? Why did you want to explore that avenue?

I grew up watching the alternative comedy scene on TV: Saturday Night Live, The Comic Strip Presents… – all that kind of stuff.

A lot of people from my generation just saw TV as the natural endpoint of doing stand-up, which was a bit silly of us really; I actually did a lot of writing jobs for TV, writing lines for panel shows and things.

As a stand-up, I wasn’t very ambitious because I always imagined that eventually I would write full time. Then I got spots on Mock The Week and Channel 4 show FAQ U over the same summer.

I hadn’t really done my own show at Edinburgh or anything like that, so I went from doing 25 minutes in clubs to suddenly selling out theatres. It was quite a strange time but, luckily, I managed to deal with it all by having a series of crippling onstage panic attacks.

How would you describe your approach to taking on TV work? Do you consider yourself a broadcaster?

I try to take on only the amount of work that I can do well. I’m not a broadcaster, but it’s something to aspire to, isn’t it? I’d like to have a bunch of old-fashioned titles in my obituary: broadcaster, laudanum addict, tumbler and mutineer.

What have been your best and worst experiences of the industry? What do you like most and least about making shows?

I’m middle-aged now, so I don’t think I really have bad experiences. Even if something goes wrong, I just sort of think: “Oh, I hope this goes so dreadfully wrong that I get an anecdote out of it.” 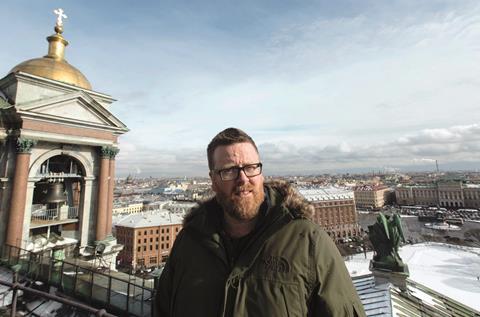 Frankie Goes To Russia: the comedian visited the host country ahead of the 2018 Fifa World Cup

I enjoy the whole process of making TV, but that doesn’t mean it’s not hard work at the time. I suppose the only bit that’s really difficult is being in London for extended periods – I live in Glasgow.

What I really love about making New World Order is the idea that we’re this little outpost of something different; that there’s a feeling of boldness to it, that the guests are excited to be on it and that we’re excited to have them.

How is making comedy for TV different to working on material for your stand-up shows?

I’m in a writers’ room for New World Order, so it’s a completely different process. It tends to involve watching a lot of clips and having the other writers try to trigger my anxieties about space – I have a profound cosmic fear of outer space – and the Large Hadron Collider.

The rest of the year, I’m writing on my own, usually stand-up, but sometimes articles. I seem to have reached a nice point where everything good I write during the year finds a home in the series somewhere. I had a month off from writing in May, for the first time in years, and I really missed it.

What are your remaining ambitions for making shows?

I’d like to write a sitcom. We’ve got a pitch for one in at the minute; an ensemble thing. I still feel properly excited about getting commissioned to write a script. It doesn’t even need to get made, just the fact that this bit of work will exist that didn’t exist before.

Steven Dick and I wrote a farce forvBBC Radio 4 a few years ago. It’s on YouTube somewhere, and the fact that something we did is out there and maybe 100,000 people will listen to it over its lifetime – I love that.

I’d still like us to have another go at writing a farce series. I think you could do it in a clever, interesting and even mainstream way and still retain the whole ‘I-can’t-believethey- did-that-Joe-Orton’ feel that the best farces have.

And what’s next on the agenda?

I’m filming Frankie Boyle’s Tour Of Scotland [working title] for Cheeky Grin/Two Rivers Media and BBC2. It follows me doing a stand-up tour. I currently spend about three hours a day reading Scottish history, then write a joke about something completely unrelated.

Are there enough diverse voices in British TV comedy? How can we encourage more?

People who work in the media have to accept that there is structural resistance to representation and that we have to do what we can to give a platform to a more diverse range of voices.

To be honest, saying that we need to do better seems to be just part of the process of not doing better. Look at directing, a position that is unique as a discipline, demanding cerebral and artistic insight: just 1.5% of film and TV directors in Britain are black or minority ethnic, roughly one sixth of what it should be.

I mean, we do discuss representation occasionally in the British mainstream, but we rarely proceed to the obvious and awkward conclusion: that non-white people are viewed, in this culture, as lacking qualities both of intelligence and artistic impulse; that non-white people are viewed as less than human by a society that they are expected to live in.

“Television is just far too complacently middle class and London-centric, for an industry whose job it is to relate to the population as a whole”

Possibly this is a delusion that Britain embraces willingly, maybe because it fears their stories or possibly because they might include an awkward section where we blew their granny out of a cannon.

Non-representation is just the cultural equivalent of not being able to meet someone’s gaze. Only a few years ago, we spoke of ‘diversity’ – and I think ‘representation’ is a much better word – but perhaps it’s time to start using the word ‘exclusion’.

What are the biggest issues that bug you about the TV industry?

Producers probably have far more interesting answers to that question than performers. In a way, good producers protect us from the realities of the industry somewhat.

There’s a class problem in TV, obviously; Britain is wonderful at finding ways of not mentioning class. 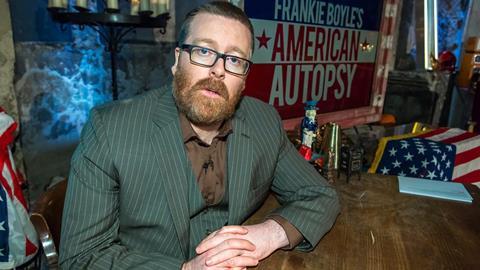 TV is just far too complacently middle class and London-centric, for an industry whose job it is to relate to the population as a whole. It isn’t really that difficult to diversify your industry a little. You offer bursaries and support to the people you want to attract – I know some of that happens, but clearly not enough.

There was a study last year that said your parents owning a house in London will soon be a key factor in social mobility, as entry-level positions in TV require you to work for less than rent. That should worry the industry: people have more choice now; they can choose media that speaks to them, and if you aren’t making it they’ll go elsewhere.

The days of a tiny section of the population making programmes for everyone else have gone.