YouTube stars to meet again in Los Angeles on November 9 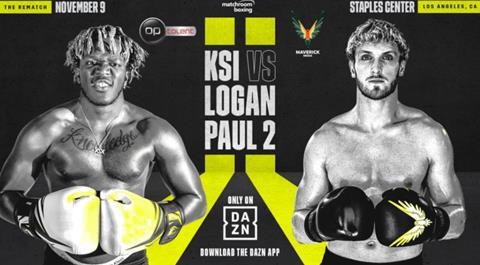 YouTube stars KSI and Logan Paul have officially announced their boxing rematch will take place on November 9 at the Staples Center in Los Angeles.

The fight will will be streamed live on DAZN in the United States, Canada, Germany, Austria, Switzerland, Italy, Spain, Japan, and Brazil.

A UK broadcasting deal has yet to be announced.

The internet superstars, who have over 40 million YouTube subscribers, boxed to a draw in Manchester last August after six rounds.

“It’s an incredible and groundbreaking deal for the fighters and also DAZN,” said Liam Chivers, managing director of OP Talent and manager of KSI. “The deal will cover global rights, distribution, promotion and appearance commitments for the fight”.

“The first fight was the largest live PPV sports event in the history of the internet,” said Jeff Levin and Paolo Moreno, managers of Logan Paul. “We are excited to be partnering with the best brands in combat sports in Matchroom Boxing USA and DAZN for the rematch. The Staples Center will be rocking on November 9.”