The grade and audio post for the 20-part series about a world inhabited by characters from the works of Dickens. 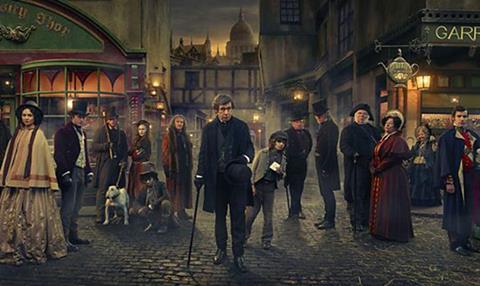 How it was done Tony Jordan’s 20-part tale of a Victorian world inhabited by characters from the works of Dickens was shot on a stage, which presented director of photography Alan Almond and Encore senior colourist Jet Omoshebi with the task of making the sets look like authentic London streets, docks and back alleys.

Omoshebi, who worked with Almond on another BBC period piece, Life In Squares, also had to strike a balance between an accessible, cheerful Christmas tale peppered with light comedic moments that reflected the grit and squalor of the period, and the tragedy and poverty contained in the storylines.

It took a few attempts to create the look of the show.

“Finding the language of a new show is always a big thing - it has to ring true to the director, producers, execs and channel, which is a lot of people to satisfy,” said Omoshebi.

“Dickensian is something that hasn’t been done before - it’s not just a period drama, or soap opera, or about Christmas, because it moves through different seasons, so we had to find a happy medium.”

One of the considerations was to make sure the lighting in “poor but cheerful” Bob Cratchit’s house was suitable in comparison with Miss Havisham’s home.

“We needed to create a shorthand for the viewer to help them quickly negotiate the narrative on an emotional level,” said Omoshebi.

She used Nucoda Film Master to combine various VFX and mattes, and to create sky replacements.

With smoke used on set to create the effect of foggy London, the Nucoda’s Sapphire plug-in was used to create consistent areas of smoke and texture.

“Dickensian is a rich Christmas pudding of sound and picture - it looks stunning and sounds rich and full, the performances are superb and the writing is amazing.

“I was invited to the set just prior to commencement of principal photography. It was mind blowing to see what they had achieved with the set and the scale they were working to. That helped inform the way we worked; it gave us a sense of proportion and scale and more of an idea of the sonic density of London at that time.

“There is a constant interplay between interiors and exteriors, so when the action is in the environment of a pub, viewers can hear the street, and when we are in the street we can also hear the pub. To convey the atmosphere of the period we have used multi-layered sound effects and created a sense of identity for each location.

“There was a lot of crowd ADR to provide the sound of voices floating on the breeze to heighten the atmosphere and give a sense of old London, but otherwise there wasn’t a huge amount [of ADR]. It’s a performance piece; there is great energy from the actors on the studio floor and we endeavoured to keep as much of the original material as possible. Ben Brazier has done a terrific job of substituting dialogue from different takes to avoid where possible the use of ADR which preserves the integrity of the original performances.

“There is lots of wonderful language and quick-fire dialogue which we needed to make sure audience can hear, while making sure Debbie Wiseman’s great score gets the airing it deserves. The show was shot in a reasonably controlled environment so rather than battling the background noise of traffic we dealt with things like footsteps that sounded inappropriate or the rustle of costumes.”