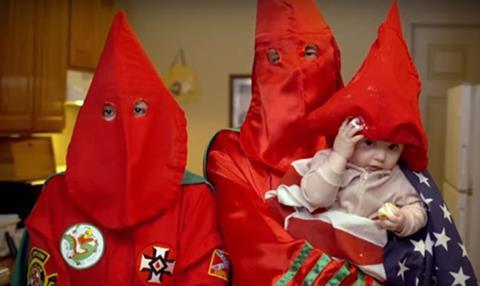 US channel A&E has come under fire for ordering the controversial doc, which follows four prominent Klan families in states such as Mississippi and Georgia with members trying to escape the organisation.

As well as detailing their internal conflicts around KKK affiliation, the show will feature a group of peace activists helping members leave.

Grey’s Anatomy actor Ellen Pompeo has called for a boycott of A&E via Twitter, while author Olivia A. Cole suggested on social media that the programme legitimises the hate group.

The 8 x 60-minute series is produced by US indie This Is Just A Test (TIJAT) and will TX in the US on 10 January and is expected to air in the UK on Crime + Investigation in March.

James told Broadcast the series is not about the Klan, but rather about “getting out of the Klan and the struggles of those activists who reach out [to members].”

He said: “[Organisations such as the KKK] are really fringe organisations but they are feeling emboldened and communicating more. I have no qualms about documenting and exposing that.

“It’s certainly appropriate to question what the effect of putting this on television is, but for me there’s no contest between not doing anything and getting that out.

“There’s a number of people that have already been helped in the course of making the show and I think it is hopefully shining a spotlight on the insidious recruiting tactics.”

Similarly, A&E general manager Rob Sharenow told The New York Times: “We certainly didn’t want the show to be seen as a platform for the views of the KKK. The only political agenda is that we really do stand against hate.”

A&E was once best known for reality series such as Duck Dynasty and Hoarders, but has in recent years renewed a push into hard-hitting doc fare with programmes such as 60 Days In and Intervention.

The channel in November premiered Leah Remini: Scientology and the Aftermath with the actor and ex-Scientologist.

TIJAT worked closely on Generation KKK with Evan Lerner, A&E exec producer for non-fiction and alternative programming, and gained access into the Klan by first investigating child preachers and meeting a child who was also involved in the KKK.

Producers then reached out to potential participants through social media.

“We were looking for people that promoted hate in the social network,” James said, reasoning that if individuals were comfortable with that, they were likely accustomed to being in the public eye.

“We talked to dozens of families inside the Klan and focused on four families ultimately where we felt the struggle was most severe,” added James, noting his team was embedded with the Klan for about 18 months.

“We didn’t [film] a lot of Klan members and families where there wasn’t that internal debate [about leaving]. We wanted to be able to show how destructive that world is.”

James believes the show, which is being rolled out on A&E and Crime + Investigation across 100 territories, will resonate internationally.

“There seems to be a trend globally towards protectionism and isolationism and anti-immigration, so I think it’s a cautionary tale in some ways about fear of others.”

In the UK, recent KKK-themed programming includes Channel 4 doc Inside the KKK from Barcroft Media and BBC3’s KKK: The Fight for White Supremacy.