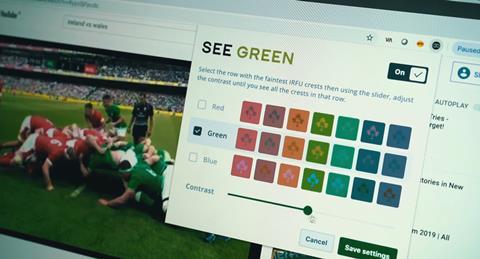 A Google Chrome extension called ‘See Green’ has been created to help Irish rugby fans who are colour blind to differentiate the colours of the teams more easily.

The tool was created by creative agency Rothco, which is part of Accenture Interactive, alongside the Irish Rugby Football Union (IRFU).

The IRFU wanted to ensure every supporter could follow Ireland in the competition, including the 250,000+ Ireland rugby fans who suffer from colour blindness.

The tool allows colour blind users to apply a colour overlay to a video by adjusting the hue, saturation, and contrast. The extension can be used for any streamed games, assisting all spectrums of colour blindness. This could benefit colour blind fans of other teams that also play in green and red kits, including Tonga, Wales, Russia, Canada, South Africa, England, and Australia.

According to Colour Blind Awareness, there are approximately 3 million colour blind people (about 4.5% of the entire population) in the UK.