…headed solo into the eye of the storm

Chris Terrill took two cameras, a few mics and a lot of gall to film Hurricane Ike as it hit Texas 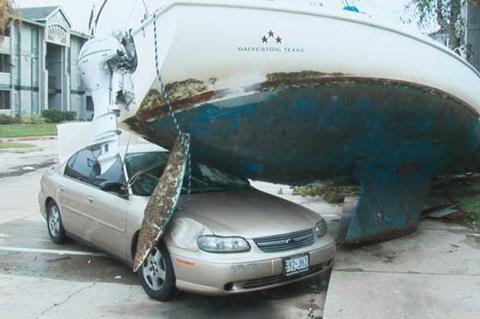 Hurricane Ike, one of the biggest cyclones ever recorded, had already devastated the Caribbean and was now heading directly to a place called Galveston on the Texas coast… where I was waiting for it, camera in hand.

Most of the town’s residents, ignoring a warning that they faced “certain death”, were staying put while I hunkered down in a multi-storey car park. I waterproofed my cameras - a trusty Z1 in a splash-bag/black bin liner/gaffer tape combo of my own design as well as an A1 for infrared shooting - in a customised underwater casing. Sound was the real challenge.

I was both filming and presenting, so I needed to be heard above the imminent roar of 100mph-plus winds, crashing masonry and a roaring sea. I spread the risk firstly by plugging into one channel of the Z1 a good directional mic bound in a condom but taped to the outside of the waterproofing. Secondly, I put a lapel mic on myself with a hard lead into the second channel. On my AI, I used one channel for the onboard mic and the other for a radio mic on me. Lastly, I put another radio mic on me linked to a spare camera I was going to leave running in my car in the car park. That would act purely as a recording device. Oh, and then I crossed my fingers.

Eventually, Ike arrived - like a freight train. I donned a ski helmet, goggles and one of those American football shoulder pads.

I climbed down the outside of the carpark and was immediately hit by a force of nature as exhilarating as it was terrifying. The most difficult thing was to actually hold on to the cameras; adrenalin helped the cause.

I flexed every muscle, took the strain and filmed while attempting to shout an ongoing commentary as best I could. I had no idea what I was managing to film or whether it was framed properly - all I knew was that the red recording light was on. I normally override the automatic functions of cameras but tonight I had the audio levels on automatic because of the very real danger of peaking. I had already made sure my focus was on manual but taped down to infinity.

As all hell let loose, miraculously, my cameras held out. My shots were a tad wobbly but I make no apology for that. I even got some semi-decent sound on most channels. By morning, the action was over but that’s when the main story unfolded for me. Galveston had been flattened.