Australian distributor Beyond Distribution, best known for selling Discovery’s Mythbusters, will be celebrating its 30th anniversary at Mipcom this year and its catalogue includes Canadian series Chasing Monsters. 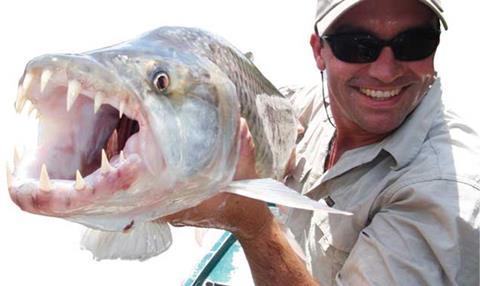 Australian distributor Beyond Distribution, best known for selling Discovery’s Mythbusters, will be celebrating its 30th anniversary at Mipcom this year and its catalogue includes Canadian series Chasing Monsters.

The firm is launching the dangerous- fishing format in Cannes after striking a deal with Canadian indie Untamed Productions earlier this year.

The 12-part series follows fishing adventurer Cyril Chauquet as he travels across the world on the hunt for colossal and dangerous underwater creatures.

Chauquet, who is a producer on the show, visits the Brazilian Amazon and Africa as he tracks down ferocious alligator gars, 500-pound groupers and tigerfish.

The show was originally commissioned by French Canadian broadcaster Evasion Canada and has been picked up by Spike TV in the UK. The Viacom-owned broadcaster launched it in August and it peaked with 112,000 (0.6%) viewers on 25 August at 9pm.

Chauquet describes the show as “action-packed”. “It’s about the determination and obsession of catching and learning about the world’s biggest and most dangerous fish, and we know Beyond will do a great job bringing it to an international audience,” he says.

Beyond head of acquisitions Caitlin Meek-O’Connor says Chauquet is “brave and engaging”. “In every episode, he chases big and dangerous creatures with diverse adventurers and shows some intimidating attacks. “The series has worldwide appeal, with every episode showcasing a new adventure in the most remote and hostile locations in the world,” she adds.

Meanwhile, Kirstie Allsopp and Phil Spencer will be promoting their Channel 4 property series Love It Or List It for the company in Cannes.