This Operation Yewtree-inspired four-part drama plunges headfirst into one of the darkest chapters of the UK’s recent history. 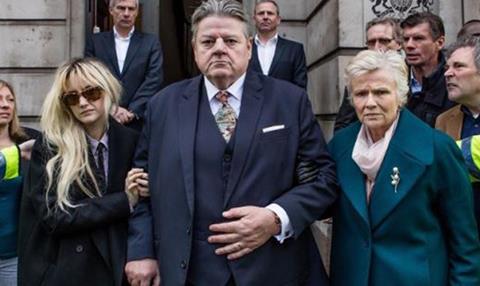 Produced by George Faber’s fledging indie The Forge, National Treasure takes the audience behind the scenes of the scandal into the police interviews, work meetings and terse family exchanges as relationships begin to break down.

With acting heavyweights Coltrane, Julie Walters as his wife Marie and rising star Andrea Riseborough as Finchley’s damaged daughter Danielle, the launch episode was Channel 4’s highest rated drama of the year, with a consolidated audience of 4.3 million (18.2%).

Writer Jack Thorne says the shockwaves caused by the Savile scandal were key: “Most of the time, when you get it wrong, all you’re doing is damaging your own professional reputation. When you do this wrong, you’re doing damage to a lot of people. People are carrying these scars for 40 or 50 years. And the fact that you’re responsible for getting those voices out there – that’s a huge task.”

While being aware of his “responsibility” to sex abuse victims throughout the script, Thorne focused on keeping the audience guessing until the very end.

“This is about a man being neither innocent nor guilty. I wanted to try to preserve that and to invite the audience in with their own prejudices, and to keep them guessing throughout the four hours of the drama.”

Graham Spencer, senior vice president of EMEA South, All3Media International, which is distributing the show at Mipcom, says that stressing the show’s tense, knife-edge atmosphere will be key when selling it internationally.

He has already received considerable interest from the US, Scandinavia and Germany. “We’ve had big interest, but to a lesser extent in the southern European territories. The Jimmy Savile scandal is still seen as a British event. That’s why we’re working hard to stress the universality of the show.”

He adds: “We focus on the historical accusation and how this would affect everything in your life: how you would react to other people, those you love and those who love you. That makes it a very human story and a masterclass in acting.”