If Alan Partridge hosted Catfish, it might look something like Radio Gaga. In this Belgian format, two radio hosts travel the country with their mobile radio station, stopping in various small communities and setting up camp for 48 hours. 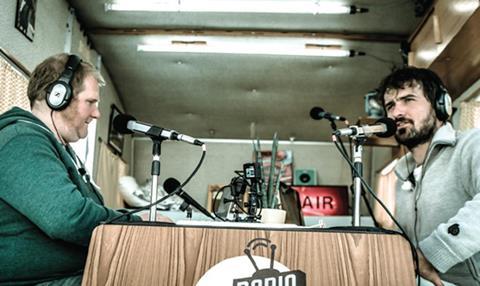 The pair – theatre actors George Hessels and Dominique van Malder – drive their converted caravan studio to locations including a prison, a trailer park, a psychiatric hospital, an asylum centre, a maternity ward and a clinic for people with eating disorders.

They hoist their antennas and hand out dozens of small radios so that locals can hear the hyperlocal show, which includes song requests and interviews.

The series is produced by De Chinezen for Belgian station Caravan, which is run by public broadcaster VRT.

It is being distributed internationally by Lineup Industries, which was set up by former Sony Pictures Television format chiefs Ed Louwerse and Julian Curtis in 2014, and is responsible for The Bully Project, the Dutch show that Jamie Oliver’s Fresh One is adapting for ITV.

Curtis says Radio Gaga is an “original and touching” format.

Lineup has already closed a major US deal for Radio Gaga with producer Critical Content, the indie that was formerly the tele vision arm of Ryan Kavanaugh’s embattled film production firm Relativity.

Critical Content, which is run by Tom Forman and Andrew Marcus, is developing the US remake with Catfish stars Nev Schulman and Max Joseph replacing Hessels and Van Malder and setting up their own local radio stations.

Produced by David & Co for Dutch public broadcaster NPO1, What The?! tries to find members of the public who will secretly undergo training to master a skill that is out of character for them.