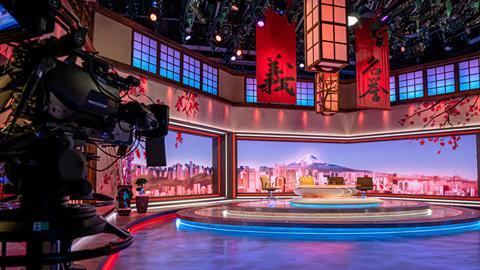 ITV has turned to mixed reality to create a ‘window on the world’ for its Rugby World Cup 2019 studio. The studio builds on the approach it took for the men’s football World Cup studio in Russia, where augmented reality was used to create a false window and extend the view over Red Square out of the real window.

For the Rugby World Cup, ITV worked with tech company, Anna Valley, to create stylised Japanese cityscape views from the ‘windows’ of the studio in Maidstone. Anna Valley is also providing in-set lighting, studio floor projection and static versions of the window views at ITV’s two satellite studios in Japan.

The Maidstone studio combines live action, augmented reality and mixed reality, with the windows consisting of high-resolution LED screens showing images that respond to on-set camera movements. This mimics the way a real-life panorama view would be seen through a physical window.

To achieve the effect, positional data is fed from trackers fixed to the live studio cameras into a Disguise server running real-time VFX software Notch.

The software then renders the cityscape content from the perspective of the cameras and feeds this back to the LED display ‘window’ in real-time.

Anna Valley director, Shaun Wilton, adds: “These ambitious projects that push the capabilities of AV technology are exactly what our technical innovation department was established to do.”