Titles for ITV’s World Cup coverage that highlights the ‘rainbow nation’ of South Africa, focusing in on the people themselves rather than the landscape in which they live. 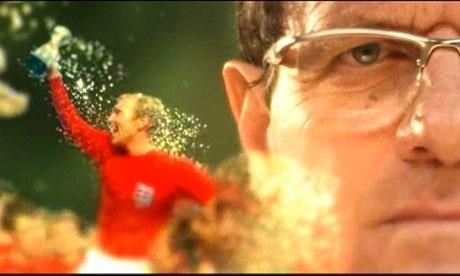 ITV Sport’s month long coverage of the World Cup kicks off on Friday 11 June with opening titles and a programme identity designed and created by Jump and former ITV Sport Director, John McKenna.

The Brief Illustrate, without using clichéd images, that an African country is hosting the World Cup for the first time.

How it was done Based on an original concept by John McKenna, the intention behind the titles was to represent the ‘rainbow nation’ by focusing in on the people themselves – rather than the landscape in which they live. Bespoke, carefully framed portraiture showing people from all walks of South African life are inter-cut with similar portrait style shots of football supporters from all over the world and the superstar footballers of today.

People in the sequence are captured looking at famous moments from previous tournaments that unfold before them in the form of liquid gold that emanates from the World Cup trophy.

The South African faces were shot in Cape Town; the world fans were gathered together and filmed in the UK along with some of the world’s best footballers, across two separate locations.

All were filmed at 4K using a Red One camera making use of various long lenses with a shift and tilt bellows attachment to maximise a very shallow depth of field to create a photographic feel.

Flowing gold, which pours from the trophy, was added to the images using a combination of ‘Realflow’, ‘Lightwave’ and ‘Cinema 4D’ as well as a great deal of rotoscoping.

Additional atmosphere and lighting effects as well as the final grade were all produced using After Effects.

Jump’s senior designer Russell Mann headed a team of four 3D artists working across three different platforms. In addition to overseeing two After Effects animators Mann was also responsible for the compositing of all of the effects.