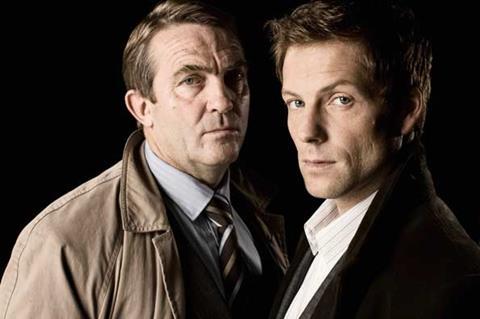 The detective is grey-haired and thick-set. I follow him nervously into the interview room. “Take a seat,” he says. His manner is brisk and authoritative, yet reassuring, almost avuncular. I must be careful. It would be easy to let my guard down. But before the interview begins his partner comes into the room behind me, grabs a golf-club and takes a swing … not at the back of my head, fortunately, but at a golf-ball, rolling it gently across the office floor. “Oh, sorry,” he says breezily. “I’ll let you get on with it.” Their boss, an imposing woman in sensible grey trousers and a v-neck pullover, stops by a moment later to have her nose re-powdered.

We are on the set of Law and Order: UK, ITV’s ambitious version of the 19-year-old American police-procedural-cum-courtroom drama. The reassuring cop is Coronation Street star Bradley Walsh. His fresh-faced junior is Jamie Bamber, back in England after his role in the cult sci-fi series Battlestar Galactica, and their boss is the formidable Harriet Walter, whose searing Lady Macbeth was recently shown on Sky Arts. These three make up the regular police team. The Crown Prosecution Service unit is led by veteran Bill Paterson, with Cutting It heartthrob Ben Daniels as senior prosecutor, and Dr Who’s Freema Agyeman as their assistant.

The indoor putting kit is one of many homely touches in what is supposed to be a central London police station. Walter’s character, DI Natalie Chandler, has a small ceramic Tardis police-box on her desk, a souvenir of her turn on Dr Who. There’s a plastic toy police helmet on a filing cabinet in the realistically untidy main office. Several shirts hang near an ironing board. Real policemen have to look smart in court, Walsh explains. They are filming at Qinetic, a sprawling complex of ugly brick and concrete buildings in Surrey, which used to be an MOD facility. Now the forbidding grey blocks house a direct copy of Court Two at the Old Bailey, together with a set of cells and a suite of CPS offices.

Buying into this American franchise has been a huge investment for ITV, but also a leap of faith. Thirteen episodes have been commissioned, a short season by US standards, but unusually long in the UK. The format may be familiar to fans of the US originals (currently running on Five with repeats of old episodes on Hallmark), but it is quite unlike most British procedural dramas. Each episode is, in effect, two separate stories crammed into 45 minutes. Except for the occasional passing reference, there is no time to dwell on the lead characters’ alcoholism, depression or failing marriages. The original plots, many loosely based on real cases, are full of twists and move at break-neck speed.

Series creator Dick Wolf flew over for the press launch nursing a bandaged foot (the result of “bad pedicure” apparently). “They are self-contained stories,” he tells me. “There are no serialised elements. You don’t go home with the people. It leads to good story discipline. There’s no place to hide. The dominoes have to fall in this show in a prescribed order.” The result is that the show has a very different ‘feel’ to previous British crime drama His production company, Wolf Films, guards the franchise carefully. There have been several spin-off shows, including the long established Law and Order: Special Victims Unit and Law and Order Criminal Intent, a feature film and local adaptations set in Paris and Moscow. There had been previous British approaches, Wolf says, and preliminary discussions with Jane Tranter at the BBC. But he is an admirer of Spooks, and when Kudos approached, the collaboration was on.

Kudos managing director Jane Featherstone head-hunted Torchwood writer Chris Chibnall to be the equivalent of an American ‘show-runner’. Standard in US, the term is rarely used here, but the role of a lead writer who oversees the artistic quality of a series has been pioneered by (among others) Chib-nall’s Dr Who mentor Russell T Davies. “At first I didn’t know which show it was, or even what genre,” Chibnall says. He was thrilled when he did find out, he adds, because it offered “such great dramatic possibilities”.

Each episode is an Anglicised version of a US original, selected from a shortlist supplied by Wolf. This was always going to raise problems. Apart from the differences in police procedure and the legal system, language, demeanour and the cultural frame of reference all had to be adjusted. Nineteen years after the first shows were broadcast in the US, technology has changed too.
Wolf makes light of this, joking that the only significant legal difference is the British use of wigs. “Once they brought in Chris Chibnall, I wasn’t really worried about the niceties of the differences,’ he says. Chibnall says his shows should not be seen as adaptations but as “dramas in their own right”. Wolf believes the stories transpose well. “New York is very multicultural. ‘It’s like London.’

An adapted version of the trademark opening statement, the ‘cold open’ pre-title sequences, captions, ‘whoosh’ sound effects and jokey banter between the characters have all been retained. Chibnall’s role dovetails neatly with that of his Torchwood colleague, series producer Richard Stokes, who says he was pleased to tap into Kudos’ tradition of ‘guerrilla filming’ on the streets. That, and the frequent use of hand-held cameras, are also retained from the US originals. There are still problems of transposition, though. The first episode includes some decidedly un-English plea-bargaining, for instance, and it’s not giving too much away to say that it opens with the evacuation of a hospital after to a bomb scare. As staff and patients stream out, two police community support officers discuss which one should risk his or her life opening the suspect holdall. Stokes concedes that in real life they would call the bomb squad. “But if there’s a choice between technical accuracy and powerful drama, the drama will always win.”

Wolf says he has been “literally blown away” by the finished show. “It is completely different and exactly the same.” He’s been talking about it in the US for six months, he says, believing it could sneak into the Saturday night slot “which is normally a dead zone on US TV”. Meanwhile, Stokes admits he is nervous as this experiment approaches its first broadcast.

There is one other difference from recent British crime shows which may yet prove the most significant of all for ITV. “It was very important that the show should be positive,” says Stokes. British comedy has been moving from edgy to feelgood for some time, so why not cop shows? All six lead characters come across as warm, thoroughly decent human beings. Bradley Walsh in particular is wise and prone to sagely humane observations. Could ITV strike gold by reinventing Dixon of Dock Green for the 21st century?

LAW AND ORDER USA THE FACTS