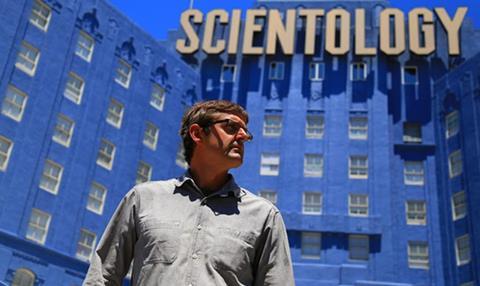 Louis Theroux delivers a pleasingly eccentric take on L. Ron Hubbard’s religious cult with the impish yet effective documentary My Scientology Movie, which is a flirty companion piece to Alex Gibney’s harder-edged title Going Clear. Theroux’s crab-like approach to the topic is typically quixotic, consistently funny, and provocative in unexpected ways. Backed by the BBC, this should travel to doc festivals after its London bow; its deceptively light tone and celebrity references should make for solid numbers on primetime TV.

Theroux says he set out to make My Scientology Movieas a potential defence of Scientology, an attempt to present the church’s case from inside. This seems a disingenuous enough stance given what even a casual bystander knows about its reputation (and that of Theroux), and the Scientologists certainly weren’t buying it, rebuffing the documentarian’s advances on every level. Thus Theroux has ended up relying on some of the same disaffected former members as Gibney for testimonly, namely Mark ‘Marty’ Rathbun, former right-hand-man to church leader David Miscavige. That’s where the structural similarity ends, however.

Theroux and his director John Dower decide instead to recreate conditions inside Scientology’s ‘Gold Base’ property in Riverside County, California, home to the elite leaders of its militaristic Sea Org ascendency and the infamous ‘hole’ where physical and psychological abuse has allegedly taken place.

They do this by holding an open casting call for actors to play Miscavige (and, amusingly, an Aviator-clad ‘Tom Cruise’).  Informed by filmed footage from the church as well as a TV interview given by Miscavige to anchor Ted Koppel in 1992, they find an extraordinarily intense actor to play him (the chilling Andrew Perez), and begin to start working on a script by Rathbun. Their activities, however, place them on the Church’s radar, and soon the cameras are turned on Theroux himself.

My Scientology Movie then proceeds on two levels. There’s the Church of Scientology’s pursuit of Theroux and Rathbun, their “squirrel-busting” posse which seemingly tracks their every move, and nuttier sequences outside Gold Base involving Theroux, the police, and Catherine Fraser, who turns out to be the ex-wife of another of the film’s disgruntled informants, former Scientology head of PR Jeff Hawkins.

And, separately, Theroux begins to needle Rathbun himself, suggesting he might be an unreliable witness and clearly trying to goad him into making further revelations. Theroux is all dishevelled charm, but Dower’s camera documents a few tense moments between the pair. This is a film replete with cameras, however, from the iphone on up, as the protagonists warily survey each other through the lens. My Scientology Movie is free-spirited enough, though, to retain an encounter with a bikini-clad wannabe actress which took place during filming and doesn’t really leaad anywhere, except to laughter.

Sold internationally by HanWay, My Scientology Movie is well-enough funded to rent California studios in which to film Rathbun’s scripted confrontations and open casting calls. Theroux’s ambitions here aren’t so much artistic as provocative, though, worming his way under the hyper-thin skins of everyone he comes into contact with and peck, peck, pecking away with his camera.