Whisper gets in the ring with Probellum 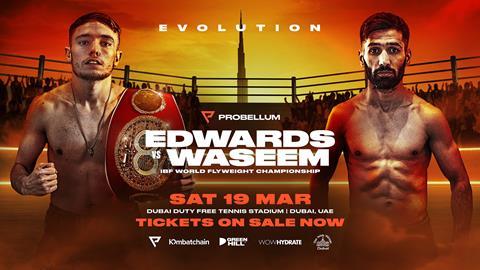 Whisper has agreed a production partnership with boxing promotion and media company Probellum.

Probellum is led by president Richard Schaefer, the former CEO of boxing giant Golden Boy Promotions, and has signed deals with promotors such as Boxing Hall of Famer Lou DiBella’s DiBella Entertainment.

Whisper’s deal with the company will first focus on five upcoming fights, that are set to be covered by an “imminent” broadcast deal. It is expected that the broadcast arrangement will be announced ahead of Probellum’s Dubai events on 18-19 March, which Whisper will produce ahead of a further three to be held in the UK.

Date and location of fifth event to be confirmed, will be UK-based.

John Curtis, Whisper executive producer, said: “Working with Probellum, our aim is to create a joined-up approach between the broadcast and in-arena experience, as a great event atmosphere will elevate the broadcast. We have the right team to deliver this vision, which will be immersive and engaging, built on delivering editorial excellence in every area, including ring walks, live fight coverage, replays, commentary and pre-fight features. Probellum shares our ambition and drive to deliver truly immersive and entertaining boxing coverage.”

Emmy Award-winning Anthony Petosa, executive vice president of production and creative for Probellum, added: “Probellum wants to reimagine how boxing can be presented in a way that elevates the athletes and the sport to new audiences while shattering the ‘That’s the way boxing has always done it’ mentality.

“We are delighted to be partnering with Whisper and its talented team. From our very first conversation they instantly understood our vision and it has been a thrill to work with them as we build towards our upcoming events starting in Dubai later this month.”