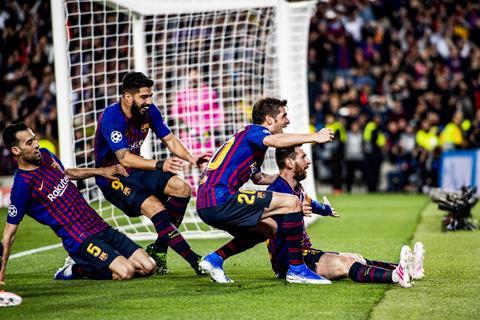 Rakuten TV has released Matchday - Inside FC Barcelona, which follows the club and its players through the 2018-2019 season.

The series is narrated by John Malkovich and, according to Rakuten, offers a “no-holds-barred” view of the club.

Matchday – Inside FC Barcelona has been produced by FC Barcelona’s own production house, Barça Studios, in collaboration with Kosmos Studios, Producciones del Barrio and Rakuten.

The production is being made available for free across 42 European countries and in Japan, through its ad-supported video on demand service.

Episode 1: A Football Classic: Luis Suárez didn’t have an easy childhood. The absence of a father figure and the problems his mother had supporting the family put him under a lot of pressure to succeed in football. The key moment of his life was when he met his wife, Sofia, when they were teenagers in Uruguay. Suárez explains that shortly after meeting Sofia she had to move to Barcelona with her family, but despite the distance they kept their relationship alive. So, when Barça became interested in him, he realised he could fulfil his life’s dream: to be in Barcelona with Sofia and play for the best team in the world.

Episode 2: Enemy Territory: A few weeks after Barça’s resounding victory in the ´Clasico´, the draw brings the team a new confrontation against Real Madrid, now in the semifinals of the Copa del Rey following two ties. The initial draw at Camp Nou, with Brazilian Malcom as the unexpected protagonist, leaves a very open return game at the Bernabéu. There, German goalkeeper Ter Stegen becomes a hero and reveals himself as a great lover of Barcelona.

Episode 3: The Curse: In recent seasons, FC Barcelona has succumbed to the curse of the Champions League quarterfinals. Now it’s time to beat another historic European club, Manchester United, to return to the semifinals. Gerard Piqué is back at his teenage home and new teammate Clément Lénglet, already in the starting eleven, receives a visit from his brothers, inspiring the team to achieve success at Old Trafford.

Episode 4: The Neighbours: There is no greater satisfaction than defeating the local rival, and it is something that Barça fans have become accustomed to recently when their team faces Espanyol. But a derby is always a special game, and as a result of their history with Espanyol, Ernesto Valverde and Philippe Coutinho know it well.

Episode 5: Match Point: It’s April, FC Barcelona’s journey through the 2018/19 League has been almost flawless, thus giving them a big advantage at the top of the table. A victory in the home game against Atlético de Madrid would secure their place at the top of the league for the eighth time in eleven seasons. Fortunately, the on and off pitch friends, Leo Messi and Luis Suárez, manage to solidify Barça’s domination in the league scoring one goal apiece.

Episode 6: European Night: The season comes to a climax with the Champions League. The semifinal against Liverpool is another night to remember at Camp Nou. Valverde and his men are at the training grounds preparing for the meeting. The game doesn’t disappoint and Barça leave satisfied after a great goal by Leo Messi.

Episode 7: The 18-Day Storm: With the outcome of the League almost decided, FC Barcelona face the final stages of an unforgettable season. But expectations are transformed into a bitter disappointment in the 18 days between the second leg of the Champions League semifinals and the final of the Copa del Rey. The outcomes of these games leave a bad taste in the mouths of the team and fans.

Episode 8: A New Beginning: After celebrating their League victory at Camp Nou, the disappointment caused by the defeats at Anfield and at the Copa del Rey test the strength of FC Barcelona. But this is sport, and the motto “more than a club” forces the team and the fans to get up and fight again for the next season. Young blood from La Masia like Carles’s Aleñà and new exciting signings like Frenkie de Jong and Antoine Griezmann give the team renewed hope.